Because of the importance of the game to the Red Bulls - Union (or New York - Philadelphia) rivalry, the Red Bulls playoff seeding and it being the home finale, I sat down with Keith Hickey of Goal.com and MatchFitUSA.com to discuss the game.  The following is my chat with him, which involves the game, the Union and the future.  Also check out The Brotherly Game for a chat with SBNation's Red Bulls blog, Once A Metro, for other views on the game. 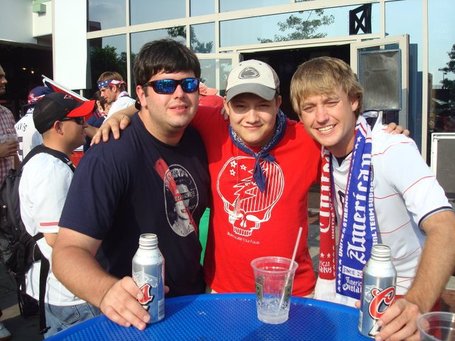 via Keith Hickey (center in picture)

Scott Kessler:  First of all, what's your prediction for this game?

Keith Hickey: The fan side of me is loathe to predict anything where New York gets more from this game than we do, but there's a reason they're in the playoffs and we're not.  I have to say 2-1 to North Jersey and hope I'm wrong.

SK:  That one goal being Sebastien Le Toux, I presume?

KH: Well it won't be Danny Mwanga, the way he's looked recently.  He's seriously jeopardizing that "inevitable Rookie of the Year" thing he had going on.

SK:  People will want to look at that injury he picked up versus Chicago as the reason why he's tailed off but I believe it was clear before it that he was losing form.

KH: He's got the talent, but the application is still lacking at times. And now he's a marked man, having gone from "rookie" to "legitimate threat."  Omar Gonzalez handled him pretty well last week.

SK:  Mwanga has to prevent such manhandlings by developing into not-the-next-Jozy-Altidore.

He likes being back-to-goal way too much and he lacks a strong first touch.

KH: He's only just turned 19, with what, 20 pro games under his belt? We put such incredible pressure on young players in this country. We rip Jozy, but he was the youngest starter at this summer's World Cup.  And I don't see anything wrong with his first touch at all. Technically, I'd say he's in the top 5 on the team, with Le Toux, Fred, Mapp, and Torres.  It's his decision making, when he makes his runs, how he creates space, when to come back and when to go forward, that's what he needs to work on.  Which is natural for a player of his age.

SK:  He's always going to get more criticism than others due to him being drafted #1 overall.  That's how it works in America.

KH: I understand that, especially on an expansion team in a city like Philadelphia. But just because it happens doesn't mean it's right. There are two guys who have the right to criticize him right now, and that's Nowak and Hackworth.

KH: Shall I keep ranting, or shall we switch it up a touch?

SK:  If you want to continue to discuss then discuss!

KH: I could go on and on about the same thing forever and not get bored of my own thoughts. But I'll leave it at this: He's done a spectacular job coming in as a rookie and has been worth several points by himself (Home to Dallas and away to Houston come to mind). He's going through a rough patch at the moment, but I have every confidence that next season, Peter and Hack will have him looking like the player he was a few months ago.

SK:  If he improves like I expect him to, then he will be in Europe in about three years.  He has so much potential, so much talent.  Size, some speed, a wicked boot... the list goes on and on for his attributes.

KH: When I interviewed him a few months back, he was pretty cagey on the Europe thing. But I'd be shocked if he's still here by 23.

SK:  I see him in England, maybe for a West Ham or of that ilk.

KH: Please, no. I wouldn't want any of our players in a situation like that.

KH: I want him at a mid-table club that can afford to bring him along at the right speed. You go too big, you get lost behind the superstars. Too small, and you get discouraged from not winning.

That's a few years off, though.

SK:  If Birmingham City was able to buy Joe Hart from Manchester City, then I'd be with him heading there.  But I'm with you on his development if he heads to Europe.  Mid-table would be fantastic for him.

KH: They didn't buy him. He spent a year there on loan.

KH: Getting back to NY, our boys have had a nice long rest, so all those little strains and tweaks should be well healed for Saturday.

SK:  But if they were able to purchase him, I was saying.  They attempted to during the transfer window.

KH: They weren't, though. He was always seen as the long-term number 1 for them. There was as much chance of City selling Hart to Birmingham as Arsenal selling Jack Wilshere to Bolton.

SK:  Hey, Birmingham can dream if it wants to.

They should have contacted MCFC about Given.

KH: Half the clubs in the league wouldn't mind having Shay Given.

SK:  Shay Given wouldn't mind being on half those clubs.

KH: Think he'd be willing to come to MLS?

The Union could use him.

KH: I was being facetious. But the Union do need to address the goalkeeping situation in the offseason.  Brad Knighton is an improvement on Chris Seitz, but the way he rushes out at damn near everything terrifies me. And he needs to learn to catch the ball.

SK:  My arguments about him are exactly the same.  He scares me whenever he makes a save because he never catches a ball.

KH: For the price, he's a fantastic backup. And in a few seasons, he might be starter material. But If I'm Peter Nowak, I'm out scouting for a new number 1 this winter.

SK:  Definitely.  Are there any quality 'keepers in the upcoming draft?

KH: I don't follow college soccer that closely, so I really have no idea. I doubt anyone will be better than Brian Perk, who we cut. If there was a 22 year old, MLS-ready keeper, he's been snatched up by Europe already. Goalkeepers take such a long time to develop; you're really not finding a starter out of the draft.

SK:  If not for a goalkeeper, what would your focus be in the draft?

KH: I think we need to go for wherever the biggest talent is. There's no position on this team where we can say "we're too deep here, there's no way another winger (for example) would get a sniff at the first team."

SK:  If the best talent at the pick is another striker, you'd still pick him?

KH: Absolutely. I like Ale Moreno, but you can't be a starter with two goals per season. And Le Toux has shown he can be effective operating from the wing.

SK:  I personally see Le Toux as most effective from a position sitting behind the striker(s), ala Kaka.

KH: I don't think you can play him centrally; he wanders too much, which is one of his strengths. I think you have to let him a have a free role to go where he needs to be.

SK:  When you said "on the wing" I pictured more of a standard 4-4-2.  I don't consider the 4-2-2-2 with two holding/defensive midfielders and two attacking midfielders as having wing positions

KH: Maybe not a classic "sprint to the end line and cross it" type wingers (if there are any of those left nowadays), but attacking midfielders who come in from the flanks on offense and then slot back into almost a 4-4-2 on defense.

Kind of like what the USMNT played at the World Cup.

SK:  That I can understand Le Toux profiting in.

KH: It's the way the game is nowadays. Attacking teams change their shape to get the best out of the personnel available.

SK:  It may be because of playing FIFA so much but I'd love to see Le Toux, Mwanga, Mapp and Salinas on the field together to start a game

KH: It's been a tough season for Shea. He's been injured so long, he hasn't had a chance to get a run of games. That speed still is something, though, isn't it?

His energy seems to rub off on the flow of the game.

He's that hard working guy that the team needs, no matter what position or role

Plus, when he's healthy he can be a weapon on the right side.

KH: I feel a bit sorry for him. Since he's been injured, we've added starters in the positions he plays best in, on the wing and at fullback.

I think he'll be used as an impact sub until he fights his way back in.

That's the comparison I can make (not as good, of course, as Milner).

KH: He's got far superior hair, and as we know from having Brek Shea, Heath Pearce, and to a lesser extent, Stu Holden (who can actually ball) in the USMNT squad, that's all that really matters.

KH: I don't get the love for Heath at left back. He didn't have any Bornstein-sized snafus defensively, but going forward, he was as flexible as an obese paraplegic.

SK:  I used him for FIFA World Cup, if that counts at all.

KH: And I conquered the world as Egypt in Civilization V, which counts about the same as yours.