In this week's top 5, we're looking at the top five beards in Philly sports history. Beards aren't just for hipsters living in West Philly (really?). They're not just for awesome bloggers either. They've adorned the faces of some of our towns' greatest athletes, and today we make them the star (the beards that is).

Editorial note: You may be shocked to see that this list isn't full of hockey players. After all, literally every Flyer who has ever made it to the postseason has sported a beard... but just throwing up five hockey playoff beards would be weak, dontcha think? 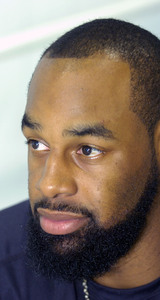 There's two notable McNabb beard eras. The one with the afro/dreadlocks and the shaved head era. The afro/cornrows era also coincided with the TO era, so I've decided to go with shaved head Donny. Plus, the shaven head accentuates the thickness of the beard.

Plus, McNabb's beard was featured on Saturday Night Live... they went for cornrows Donny. 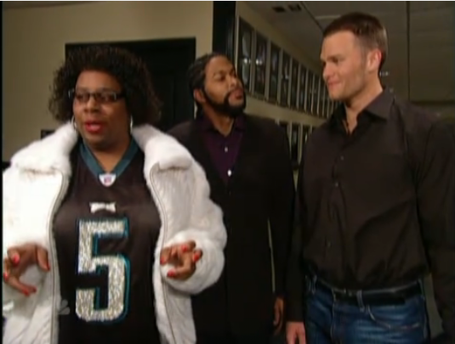 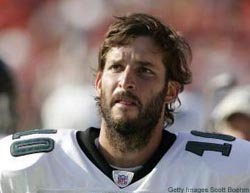 Koy Detmer would be the odds-on favorite to win the worst beard in Philly sports history, which is why he belongs on this list. This isn't the list of the best, it's the list of the greatest. The mere fact that his nickname was "neckbeard" means that his facial hair made an impact. It's just odd that no one, not his brother, his teammates, no one ever saw fit to mention to him "Hey the beard is fine, but you know you can just trim up the neck and it'll really look good and put together..." It has been rumored that the neckbeard was the source of his talent at holding for field goals. No one held better than Koy.

Funny aside. I once worked for a local radio station that hosted a playground build with the Eagles at an inner city Philly school. All the players helped pour concrete or paint or something... except for Koy. Koy hung out in our radio tent checking out the CDs and ducking down whenever he thought Andy Reid was looking for him. True story.... 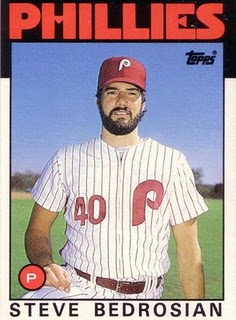 This one is somewhat colored by my own childhood. One year, probably around third or fourth grade, I was school shopping with my mom and we came across these folders that looked like giant baseball cards. Actually, they really were giant baseball cards. The front was a Topps card with the player and name while the back had all of his stats. There were ones for lots of different teams but naturally I wanted a Phillies folder. The only Phillies folder there was happened to be that of Steve "Bedrock" Bedrosian. I wish I could find the exact card to show you... but it was a close up of his face. So for two years, I stuck my important school papers in a folder with Steve Bedrosian's giant bearded mug on it. To this day, that image is burned in my brain.

Oh and did you know that he actually won a Cy Young with the Phillies? 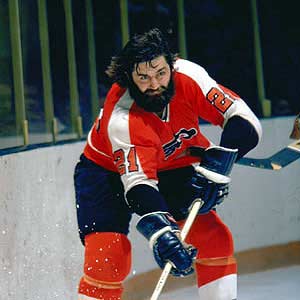 I may not have remembered/known about Cowboy Bill had I not recently watched the Broad Street Bullies documentary on HBO. If you haven't seen it yet, watch it. It's fantastic... Equally as fantastic though is Cowboy Flett's beard. Best part is, that was no playoff beard. He kept this thing year round. 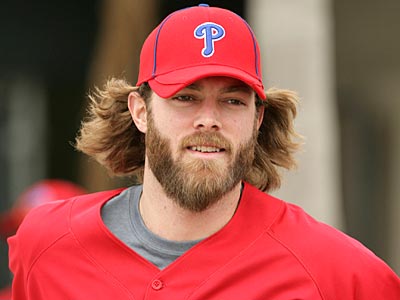 I don't know that one picture has done more for blogging in 2010 than this shot of Jayson Werth on the first day of spring training. It set off a firestorm of twitter messages, facebook posts, and blog entries... Personally, I remember refreshing the Fightins over and over again waiting for new photoshops to show up. It was a sensation... and unfortunately it may have been the high point of the Phillies 2010 campaign!

Honorable Mentions - If I was posting hockey playoff beards, surely there would have been a place for Scott Hartnell's epic chin coif. Villie Leino's beard which Puck Daddy described as "juts out like a dangerous rock formation on a New England shoreline" would have gotten serious consideration. No Sixers made the list but I gave Reggie Evans' bald head/sideburn to sideburn full beard combo a lot of thought. Probably the only thing that kept former Sixer and Howard Eskin look alike Mike Gminski off this list was my inability to find a good bearded pic of him in a Sixers uniform.