To win a title in the NBA you have to play with good players, just be sure they aren't too good!

When Alex Rodriguez left Texas for the New York Yankees, I don't believe anyone ever wrote that his "legacy was tarnished" or that he'll "never be as good as Willie Mays" now!

I don't believe when the discussion of the greatest NFL QBs comes up that anyone says "Yeah, Joe Montana is good but he had Jerry Rice!"

What about Ray Bourque? Surely NHL fans don't count him among the greats after he "turned tail and ran" to Colorado just to win a cup with other stars? Actually, they do. Had Bourque been in the NBA, we probably would have read something like this.

LeBron Bourque needed to build a team, and win a championship, as the greats in the past have.  He did not.  He chose to turn tail and run.

There's something about the NBA that holds guys to a different standard than players in any other sport. It's almost as if a guy doesn't win a title playing one on five then his "legacy is tarnished." Then there's the ever present specter of Jordan looming. This mythic and nearly impossible standard of greatness to which every NBA player is compared.

Even before LeBron James made his "decision" people were banging out blogs threatening that a move to anywhere but Cleveland would doom his so called "legacy."

Going to Miami, a team with a superstar in place already, can only take away from that legacy.  Right now, LeBron is the greatest Cavalier of all time.  Sure, not the legacy James is hoping for, but heading to Miami, where Wade is The Man, and Pat Riley gets all the credit and little blame, would not help LeBron escape the shadow of Jordan.

"The shadow of Jordan:" a familiar theme in many of these same articles. This idea that the only acceptable standard of success for a guy like LeBron James is to become the greatest basketball player that ever lived and to do so he must win multiple championships with the same team seemingly all by himself. Never mind that even Jordan himself didn't do this.

Jordan played with another top fifty player, perhaps the best rebounder and defender of his era, a laundry list of clutch shooters, one of the best sixth men ever, and for the best coach of all-time.

No other player in any other sport has ever been held to these kind of standards and yet it happens all the time in the NBA. This legend of Jordan has outgrown even Jordan and is now just used as a way to belittle and criticize great players currently in the NBA.

Just ask Kobe Bryant. Before the '09 season all he had done was win three NBA titles, a league MVP, two scoring titles, & made 10 All-Star games. By any measure he was one of the greats even if he would have hung up his sneakers in 2008. Yet all that was ever written was how he couldn't win a title without Shaq. He'll never be as good as Jordan because he accumulated most of that laundry list of hall of fame worthy accolades while Shaquille O'Neill was on his team. Again, never mind that Jordan also won all his titles playing with one of the top 50 players of all time. Kobe went on to prove those doubters wrong by winning back to back titles the past two years. It remains to be seen whether history insults the career of a great player like Pau Gasol by saying Kobe won those titles "by himself."

Those same doubters are making sure that Kobe's redemption won't be possible for LeBron. Even if he wins titles in Miami, it'll only be as a "complimentary piece" on Dwyane Wade's team they say. Of course, let's not praise Wade too much either because after all... he'll have had LeBron on his team. Oh and so far he can't win without Shaq either.

See what nonsense this is? This culture of tearing guys down that has inhabited the NBA. Maybe I'm too young to remember, but was this ever the case in the Magic/Bird or Russel/Chamberlain eras? Magic and Bird played on teams loaded with stars... did anyone use that to belittle their accomplishments at the time? Considering that Kareem Abdul-Jabbar, who won titles with Magic Johnson, is a better player than anyone LeBron will play with in Miami... does that mean Magic can't be as good as LeBron? The twisted logic can make your head spin.

I'll stipulate that the NBA is a star focused league. I get that with five guys on the floor that the ability of one guy to influence the game is maybe greater than in other sports. Still, that doesn't explain the extreme difference in the standards that NBA players are held to as opposed to stars in other team sports. Lucky for them I guess, Michael Jordan didn't play their sport (Well...).

Give LeBron a break. Give all these NBA guys a break. This weight of history, most of which strays further from reality by the day, is more than these guys should have to bear. 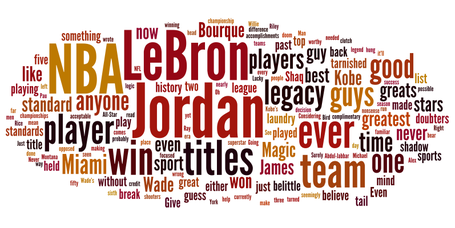