How Much Did the Flyers' Big 4 Underperform Last Year?

The Flyers saw their regulars dramatically decrease their production last year. How much can they be expected to rebound?

Share All sharing options for: How Much Did the Flyers' Big 4 Underperform Last Year?

With the calendar slowly turning to September, the time has come for writers around the hockey world to start making their predictions. The Hockey News just came out with their preview issue and predicted the Flyers will finish 4th in the East this year. (Online is only a teaser, with the bottom nine teams being listed.) Plus, ESPN is running predictions -- warning, pay wall -- from Puck Prospectus writer Timo Seppa.

Because so many players had down years last season, expectations are for a bounce back year. But what exactly can we expect out of the 2010-11 Flyers? To figure this out, let's first look at what they've done recently.

Rather than looking simply at a players' point totals, it's important to take into account how many games they played and how much ice time they got. Gabe Desjardins does fantastic work over at Behind the Net, but rather than use his work, we're going to try something different.

To adjust for the games played and time on ice differences, let's look only at players who played in 40 games each of the past two years. Then we'll look at how many points they scored per 60 minutes -- one game's worth -- of ice time.

Only seven forwards had 40 games the past two years for the Flyers. 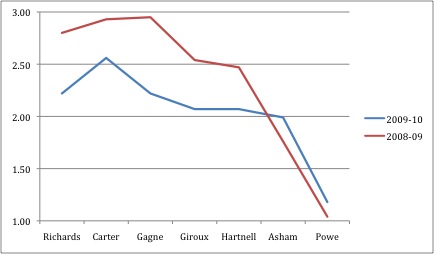 So what are you looking at? Well, Mike Richards scored 62 points last year, playing in all 82 games. He was on the ice for a total of 1,673 minutes. After finding how many points per minute Richards scored, we multiply by 60 to equate to a full game. There are obviously problems with this approach -- Richards spent 177 minutes killing penalties while Hartnell only spent 28 minutes shorthanded -- but rather than looking at a straight point per game ratio, this shows how successful Arron Asham was in limited playing time. To view the information in Excel, click here.

There is such a large drop-off at the end because Powe isn't a scorer, but what's really interesting is the distance between two years ago and last year.  When 5 of the team's top forwards are scoring significantly less (between 0.37 and 0.73 points per game less, to be exact) than the year before, there's a problem. Especially considering that they were among the top-6 forwards in ice time this past year.

Yes, the Flyers as a team scored the 3rd most goals in the Eastern Conference last year.  What CSNPhilly didn't say is that the team still scored 28 fewer goals than the year before. While the losses of Joffrey Lupul and Mike Knuble could be blamed, the fact is that none of the Flyers big names -- including Briere -- scored more points per 60 minutes of ice time than the year before.

Does that mean the 2009-10 Flyers underperformed, or does that mean the 2008-2009 Flyers over-performed? Well, probably a mixture of both. If you look at the Flyers' big four -- Richards, Carter, Briere, and Hartnell -- over the last three years, you see this: 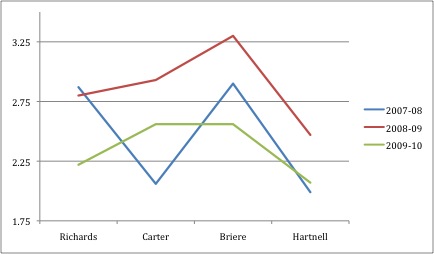 Just remember the green line is the most recent season. The red line is the year before. What does that tell us? Well, 08-09 is a pretty big outlier for both Carter and Hartnell. Also, Mike Richards had an extremely uncharacteristic year last year. He should bounce back nicely, scoring around 80 points as he returns to a 2.80 points per 60 mark.

Danny Briere had a down year, but his 2008-09 numbers are inflated due to him only playing 29 games, so they can't exactly be trusted. While he had a really nice playoffs, that was even fewer (23) games. Look for him to increase his production next year -- around 60 points -- but not much more than the 53 he scored last season.

What's most interesting are Carter's and Hartnell's numbers. Hartnell had a breakout 08-09 season and a miserable 09-10 season. What you probably didn't know, though, is that he scored just as many points this past year as he did when he had 24 goals two years ago. Looking through Hartnell's previous seasons, he's a career 40-50 point scorer. Only once did he score more than 48 points in a season and that was (the red line in the chart above) when he scored 60 points. Hopefully Hartnell turns some of those assists into goals, but 45 points is what should be expected from Hartnell.

As for Carter, he's a lot more difficult to predict. His 84-point breakout season was huge, with many people expecting him to be a perennial 40-goal scorer. But this past year was Jeff's second best in the NHL, and he "only" scored 61 points. That's a rather large 23-point spread between best and second-best years, and it will take a big year from Carter in 10-11 to avoid having that season labeled a fluke.  Expecting 65-70 points might be even be asking for a lot.

While the 2009-10 Flyers underperformed compared both to what was expected from them and what they did the year before, fans shouldn't expect a big jump in points next year. Mike Richards should see a big jump in production, while Danny Briere should see a modest jump. Outside of that, Jeff Carter had the second-best year of his career. Scott Hartnell had a year -- points wise, at least -- right in line with his career norm.  Expecting Briere, Carter, and Hartnell to return to their career best just isn't feasible.  Expecting a modest increase is fine, but last year was only unusual for Mike Richards.  Even Briere's down year follows a 4 year trend of declining production.

Instead, players such as Claude Giroux, James van Riemsdyk, Ville Leino, and Nikolai Zherdev will be counted on to put up some points. How much they need to contribute depends on the Flyers big-four proving last year was the fluke, not 2008-2009.  Luckily, all four of those guys are expected to progress in their development.