The Downside of the Bullies: Drafting Goons

The Flyers love being the Broad Street Bullies. So much so that the organization drafted goons instead of hockey players.

Share All sharing options for: The Downside of the Bullies: Drafting Goons

Earlier, when looking at the Flyers' farm system, we mentioned the team's habit of drafting tough guys and how that has left the team short on NHL players as well as how it contributed to the Phantoms' miserable season. It shouldn't have come as a surprise to any Flyers fans, though, since the team has been carrying on as the Broad Street Bullies for nearly 40 years.

Sometimes, the mentality serves the team well. Chris Pronger exemplifies what the Broad Street Bullies were: skilled, mean, disciplined, beloved, and many other things. Steve Downie is an example of a team caught up in the idea but willing to sacrifice one or more areas (discipline, in Downie's case). Throughout the past decade at least, this dichotomy has been extremely frustrating.

Before going any further, know that I relish the Broad Street Bullies attitude. The Flyers are unique in their style and their game fits the fans better than any other team in the league. But that doesn't mean every move in conjunction with that attitude is correct.

Just like in the previous story, I'll only be looking at the prominence of the Broad Street Bullies attitude in the team's draft selections. Maybe later we'll look at acquisitions in line with the philosophy, but it's the drafting strategy that is the most infuriating.

Because I like order, we'll work chronologically. First, the good news:  the Flyers have only drafted two players with 80 or more penalty minutes the past two years. Both of them (Brendan Ranford, 7th Round, 2010; Dave Labrecque, 6th Round, 2009) had scored at least 63 points (0.9 per game) the same season. In other words, if the Flyers drafted guys with high penalty minutes, they also drafted guys who can score.

But in 2008, the team drafted Zac Rinaldo in the 6th Round. Rinaldo is a guy many people are talking about, but it isn't because of his skill. Instead, Rinaldo is at best an agitator and at worst an unhinged, professional Happy Gilmore. We'll know for sure after he plays for the Phantoms, but the point is that he fits the Broad Street Bullies philosophy. In the two years before he was drafted, Rinaldo played in 107 games and scored 46 points. He had 394 penalty minutes.

Maybe Rinaldo will become a solid NHL contributor, but he averaged 4.1 penalty minutes per game this past year. Even Dan Carcillo only averaged 2.7 last year. Time will tell with Rinaldo, but his ceiling isn't very high.

The 2007 draft saw the Flyers draft Garrett Klotz in the 3rd round (#66 overall) after he had 107 penalty minutes in 63 games, scoring only 4 points. Klotz has since registered 7 points in 109 AHL games. The players drafted immediately after Klotz:

The 2005 draft was perhaps the most illustrative of the Flyers philosophy. First round pick Steve Downie was coming off a 73-point, 179-PIM season in the OHL. He didn't work out in Philadelphia, but he just had a career year last year in Tampa Bay, scoring 46 points in 79 games while adding 208 penalty minutes. The next forward selected in 2005 was James Neal, who just put up a 55-point season for Dallas. For their careers, Neal is scoring 0.14 more points per game than Downie. Now, Downie's season shows that he had skill worthy of playing in the NHL, but drafting players of his skill-set is a dangerous risk the Flyers just can't stay away from.

In the 5th round, the Flyers selected Josh Beaulieu (RW, 22 points, 159 PIM in the OHL the year before) while Wacey Rabbit (C, 67 points, 70 PIM the year before) went two picks later. Beaulieu has a total of 12 AHL points in 136 games while Rabbit has 78 points in 216 games. Maybe Rabbit was a lucky pick, but Alex Berry (selected immediately after Beaulieu) hasn't exactly set the AHL on fire. Berry was drafted out of an American Tier III Junior organization (in other words, not very good) and has only managed 7 points in 63 AHL games. But even that would have been a better pick than Beaulieu, who has admittedly cut down on his penalty minutes.

Lastly, the 2004 draft saw the Flyers draft Gino Pisellini out of the OHL in the 5th round after playing in 68 games, scoring 30 points and registering 214 penalty minutes. He has since compiled 2 points in 32 AHL games. With the next pick in the draft, the Canadiens selected Mikhail Grabovski, who has 92 NHL points. The next forward selected was Steven Zalewski who has 107 points in 160 AHL games. The Flyers once again went with toughness over skill.

Maybe all of those numbers didn't exactly mean much to you. So, take a look at this chart: 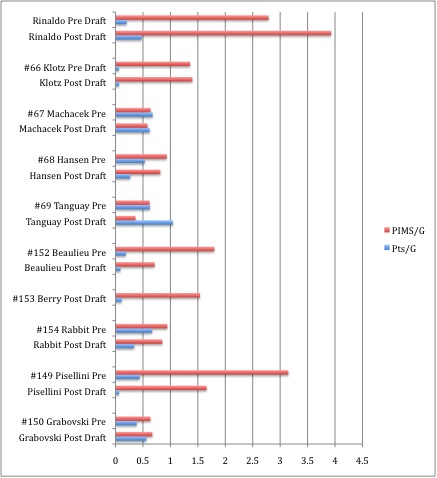 Apologies for the mixed up axes, but it illustrates the point better. The red bars are penalty minutes per game while the blue bars are points per game. Of all these players, the only players to break one penalty minute per game who wasn't drafted by the Flyers is Alex Berry, drafted out of a Tier III Junior league.

Visually, is it apparent why Klotz was picked over Machacek, Hansen, or Tanguay? Not to me, anyway. What about picking Beaulieu over Berry (admittedly, a miss by Toronto) and Rabbit? Or Pisellini over Grabovski? Even looking at their numbers at the time of the draft, the players picked by the Flyers were averaging 2.14 penalty minutes per game while only scoring 0.234 points per game.

Even if Tanguay never gets out of the ECHL or Hansen never scores more than 12 points in a season, why use a 3rd round pick on a player who - even if he somehow makes it to the NHL - is readily available every offseason for cheap? Hopefully the last two years are indicative of the Flyers changing their philosophy after being burnt by the likes of Klotz, Pisellini, and Beaulieu.

Simply put, when you trade away as many draft picks as the Flyers do, you can't afford to waste them on players who can't score. Finally, they seem to understand that.