I know the Toronto Maple Leafs were eager to stick it to Chris Pronger and the Philadelphia Flyers, but I’m pretty sure this isn’t what they had in mind.

The Flyer’s captain was sliced open on a high stick by Toronto center Mikhail Grabovski halfway through the first period and immediately crumbled to the ice in pain.

The Miami Herald has the play-by-play:

With the puck at the low left circle in the Flyers end, Pronger attempted to get to the puck, but Toronto’s Mikhail Grabovski got there first and took a swipe at the disc. Grabovski’s follow through went up and hit Pronger in the face, but no penalty was called on the play. Pronger immediately skated to the Philadelphia bench then went into the locker room.

No word yet on the extent of Pronger’s injury; however, keep it locked in to SB Nation Philly for further details to this developing story, as they become available. 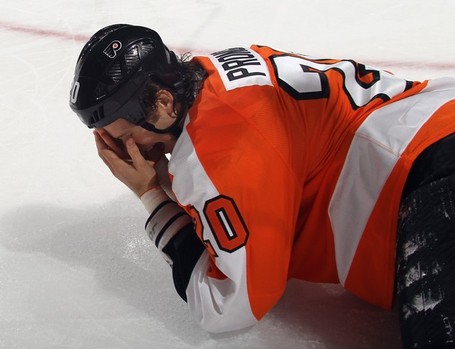 Chris Pronger Out For The Season With Severe Post Concussion Syndrome