Ryan Spadola Tweet Gets Him Suspended For FCS Playoff Game

Lehigh will be without their All America WR Ryan Spadola this afternoon when they face #2 ranked North Dakota state in the quarterfinal round of the FCS playoffs. Spadola had 96 catches for over 1,600 yards and 11 TDs this season, but a twitter message referring to the Towson football team, who Lehigh defeated in the previous round, has gotten him suspended for the game today.

Spadola, who is from Howell, NJ, retweeted the following message from a former high school teammate. 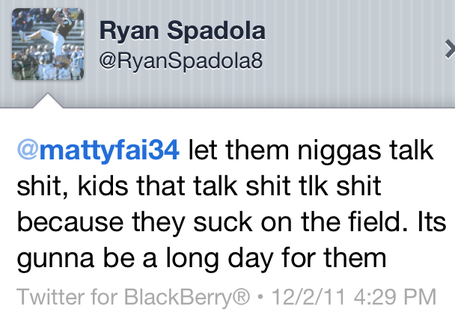 It appears the original user who tweeted the message to Spadola has deleted his account. So it's hard to say whether the former teammate was black or was using the term in a derogatory way. Either way though, clearly Spadola needed to exercise more judgement. On one hand, these are just college kids, but at the same time you are somewhat of a national figure if you're playing college football at this level. What you say or do can become news... and clearly that tweet isn't something Spadola would want representing himself in a hundred news stories around the internet. But that's what he got.

"To my competitors, teammates and to everyone else who has seen the tweet I forwarded and was offended by my action, I humbly apologize and ask for your forgiveness of my unwise behavior.

At the time I received and forwarded the tweet, I didn't stop to think about how this could be offensive. In hindsight, I recognize that it was clearly inappropriate. I would never do anything to intentionally harm or berate others regardless of ethnicity. Everyone who knows me knows that to be true."