Sixers Reach .500 With Win Over Pistons

Share All sharing options for: Sixers Reach .500 With Win Over Pistons

The Sixers beat the Pistons 110-94 at the Wells Fargo Center tonight putting them team at the .500 mark for the first time all season. Battling back after a 3-13 start, Doug Collins has guided his team to a winning record in three straight months, a feat they haven't accomplished in 10 years.

Thaddeus Young led the way for Philly tonight with 24 points, but the Sixers got key contributions from starters Elton Brand (20 points, 17 rebounds) and Andre Iguodala, who filled the stat sheet with 21 points, 11 assists & 7 boards. The Sixers dominated the boards overall tonight out-rebounding the Pistons 54-37.

It was the third straight win for the Sixers and the third straight loss for a Detroit team that appeared to stage a small revolt before the game. Veterans Tracy McGrady, Richard Hamilton, Tayshaun Prince & Chris Wilcox all skipped the teams' morning practice as part of what the Detroit News called a "player protest." The veteran players, who appear to have no love for coach John Kuester, were reportedly angry that none were dealt or bought out at the trade deadline to give them a chance out of a pretty sad situation in Detroit.

In fact, Kuester was ejected from tonight's game about 20 minutes in for arguing calls... which Tracy McGrady found hilarious. SBNation's Mike Prada grabbed a screenshot... 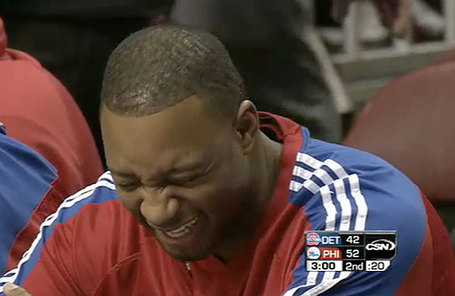 Sixers Reach .500 With Win Over Pistons