You may remember back to last August, 12th when the Phillies erased a 3-run 9th inning deficit against the Dodgers with Jonathan Broxton on the mound. Sitting right on the dugout, a young Phillies fan named CJ put the hex on Broxton and he promptly coughed up the lead. We had a photographic montage of hex boy's antics.

He became somewhat of a minor celebrity after the game, even getting an interview on the local news.

Well, the Phillies were down in the ninth once again today and guess struck again? Not one second after this shot of hex boy, did John Mayberry Jr. hit the game winning single off Houston closer Brandon Lyon. 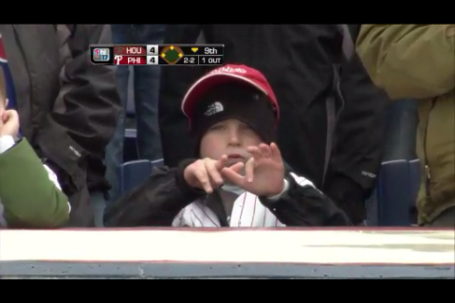 Yet another NL closer falls victim to hex boy. Also, not only does he have magical closer killing skills, he also has a smoking hot nanny whose job it is to take him to games. Most of us could only dream to live the life of hex boy. 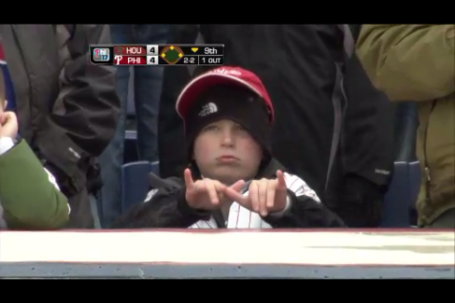