Current Philadelphia Eagles Mocking Each Other Over Jim Tressel

Share All sharing options for: Current Philadelphia Eagles Mocking Each Other Over Jim Tressel

Brandon Graham and Kurt Coleman were both members of the Philadelphia Eagles 2010 draft class. Graham is a graduate of the University of Michigan while Coleman hails from their bitter rival, Ohio State. So in the wake of the Jim Tressel resignation/scandal/ridiculousness it's no surprise that the Wolverine is giving the buckeye a hard time. Graham took to twitter to give Coleman some good natured (is it?) taunting.

The "vest" he's referring to, is of course Jim Tressel. Graham has also been retweeting all of the anti Ohio State messages he's been getting from his fellow Michigan fans... 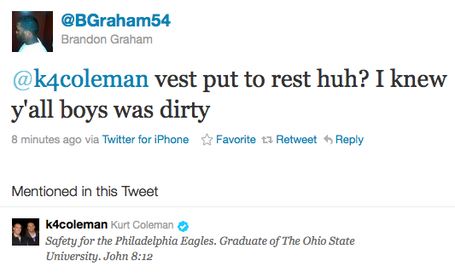