With a lot of new faces, the Flyers look to make a return trip to the Stanley Cup Finals.

Share All sharing options for: 2011-12 Philadelphia Flyers: The Start Of A New Era

The idea for this post came to me when I visited the Flyers' website today. Right on the front page is a small square (presumably 250x250) for Flyers' 2011-12 season tickets. Pictured in the photo are Brayden Schenn, Wayne Simmonds, Ilya Bryzgalov, and Jakub Voracek (who looks eerily similar to Claude Giroux). Seeing this really helped me to digest what exactly went down last week. 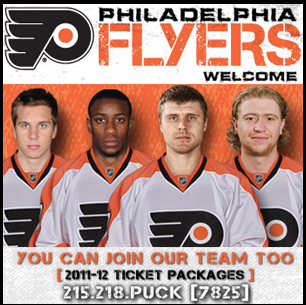 After all of the trades, the Flyers had about $10.5-11 million to spend. Today they re-signed Andreas Nodl (why?) to a 2-year, $1.69 million deal and signed Tom Sestito to an undisclosed contract.

As of right now, the Flyers do not have a captain. In my eyes, Chris Pronger should be the favorite with Danny Briere and Timonen as assistants. When asked about the captain vacancy, Pronger had this to say (courtesy of PhiladelphiaFlyers.com):

You know what, I haven’t put much thought in it to be honest with you.  This is all very, very fresh to a lot of us.  Obviously I’d have to talk to Homer and Lavi and see what their thoughts are, and kind of go from there.  You don’t nominate yourself.  I’ve never been part of a team where somebody nominates himself.  I think that may be a little bit premature to start talking about stuff like that.  It’s one day after two huge trades on our team and in the history of the Flyers, so I don’t think that’s in anybody’s minds right now.

Clearly, Pronger has a huge effect on this team. As soon as he was sidelined with an injury last season, the team started to look flat and fans everywhere had an uneasy feeling. That sense of security on defense and in the locker room just didn't seem to be there.

It looks as though James van Riemsdyk and Claude Giroux will be the new Mike Richards and Jeff Carter. Here's Paul Holmgren when asked about how JVR and Giroux affected his decision on the trade:

Certainly the emergence of Claude over the last few years has been a factor. I think the ascension of James over the last part of the season and particularly the playoffs – I think we have two good young players there that are on the verge of doing even better things for our team.

After last season, the feeling around Philadelphia was that this team had a short "window" to win a title due to the age/contract status of some of the players. With the subtraction of Richards/Carter and the addition of Simmonds, Voracek, and Schenn, the Flyers got considerably younger.

With that being said, the future looks bright for this team. An injection of youth may not have been the top priority, but it is surely welcomed.