The longest and most important single day cycling race in the United States takes place tomorrow in Philadelphia with the 27th annual Philadelphia International Championship. Coverage of the race will be begin at noon in HD on Comcast Sportsnet Philly and last until 3:30. Comcast will also air the race live on all of their Sportsnet networks across the country. Versus will then air the race tape delayed at 8pm nationally on Sunday night.

The race favorite is 20 year old Slovakian Peter Sagan, who seems to thrive on tougher races and should relish the chance to tackle the Manayunk Wall. He was strong in the Tour of California race three weeks ago and will look to carry the momentum into Philly Sunday. The top American is expected to be Pat McCarty, who won the King of the Mountains title, which is given to the best climber in the Tour of California. He too should be able to press an advantage at the Manayunk Wall.

The Philadelphia International Championship is a 156 mile circuit which starts at the Art Museum and follows the Schuykill River northwest through Roxborough and Manayunk, then back down through parts of Fairmount Park. In all it's a 14.4 mile circuit which the male racers must complete 10 laps of. The ladies, racing in the concurrent Liberty Classic, must complete four laps of the circuit.

The iconic portion of the race is of course the Manayunk Wall, which refers to the section of the race that passes through Manayunk's Main Street, Levering Street, Cresson Avenue and Lycuem Avenue. The hill is a 17-percent grade, making it easily the toughest climb of the entire course. It's also the most popular area to watch the race from. The most welcome sight of the circuit for any racer is the "Fall from the Wall" after the pack turns off Lyceum Ave. Below we've got a map of the full course. 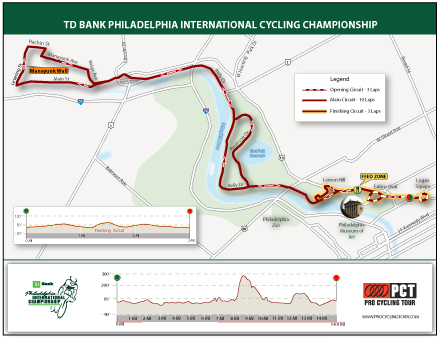 There's a wealth of great video on Youtube, but this is just a sample of the racers climbing the 17% grade of the Manayunk Wall.