If you buy something from an SB Nation link, Vox Media may earn a commission. See our ethics statement.

The Maple Street Press 2011 Philadelphia Eagles annual has officially hit newsstands today. For those that haven't heard about the magazine yet, I was asked to edit the first ever edition of the Eagles annual and I believe we've compiled a pretty impressive roster of writers and a great magazine full of interesting features and info for Eagles fans.

The annual is 112 pages of exclusive Eagles content, totally ad free for just $9.99. Here's an idea of what you'll get.

First, yours truly has a feature on Eagles' first round pick Danny Watkins as well as a position by position preview of the team.

JimmyK of Bleeding Green Nation and Blogging The Beast previews the entire NFC East, projects how the 2010 draft class can do in their second season and has a feature on Andy Reid, now the longest tenured coach in the NFL.

Tommy Lawlor delivers a pick by pick scouting report on the entire 2011 draft class, has a feature on the new coaches Howard Mudd, Jim Washburn as well Juan Castillo and takes a great look back at the 1991 Eagles defense, which is seen as one of the great units of all time.

Gabe Bevilacqua formerly of IgglesBlog and BountyBowl does a feature on the game that inspired his old blog's name and looks back at what made Buddy Ryan such a popular figure in Philadelphia.

Andrew Kulp of The 700 Level took an in depth look at the current team and says that their championship window is open right now.

Jordan Raanan, NFL columnist for Comcast.net has an interview with Jeremy Maclin, Jason Avant and Jamaal Jackson who are predicting yet another record breaking year for the Eagles offense.

Our own Bob Q looks back at the 2004 Superbowl squad now that last vestiges, David Akers & Quintin Mikell, are gone.

Sam Lynch formerly of Iggles Blog and currently at Iggles Blitz takes at look at the Eagles handling of the salary cap through the years.

Brian Solomon of McNabborKolb took an in depth look at the Eagles' QB evolution from Donovan McNabb to Kevin Kolb to Michael Vick.

John Breitenbach of Pro Football Focus did a statistical analysis of the idea that the Eagles defensive ends wear down at the end of the year. His findings were interesting...

Scott Kessler, who is a regular commenter here and runs our Phiadelphia Union site, looked back at the career of David Akers and gave him a fine send off.

Tom McAllister, the writer of Bury Me In My Jersey and a professor at Temple. contributed an amazing article on his journey from hating Michael Vick, to acceptance, to eventually rooting for him. In my opinion, this article is worth the price of the magazine alone.

Finally, there's you! We've got a section featuring your predictions for the 2011 season and you'll find many of the familiar names you see on the site in there.

The annual is in stores now August 15 and should be available wherever magazines are sold all around the Philly area. If you live outside the area or don't want to wait, you can order online at the Maple Street Press website. However, if you go to the Maple Street Press facebook page and like them, you can buy it from there and get free shipping. I really hope you like the annual, I personally spent a long time getting it together and all the writers worked hard to contribute some really great stuff. 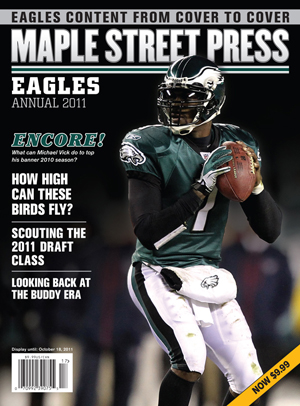