I did this when the Eagles released Jaiquawn Jarrett, might as well do it for the Juan Castillo firing. Time to look back on what I wrote that fateful day.

Share All sharing options for: Revisiting the Juan Castillo Hiring

In light of Juan Castillo's unceremonious and scapegoat-y dismissal, I thought I'd take a look back at what I wrote the day he was hired:

Well, this is sure to appease a lot of fans. The three-week-long search for a defensive coordinator is finally over, and suffice to say that no one saw this move coming. The news started to filter out late this afternoon that the Eagles hired the team's offensive line coach, Juan Castillo, to replace Sean McDermott as defensive coordinator. Wait, what?! I don't feel like doing the research, but I have to think what happened today is unprecedented in the history of the NFL. Stunning. Mystifying. Dumbfounding. Stupefying. What-the-fuck-ing. All synonyms that describe complete and utter disbelief apply. Maybe most shocking of all, however, is that the Eagles didn't wait 11 more days to make this announcement in an attempt to steal the Phillies' thunder as they opened spring training. I kid, I kid. Sort of. Anyway, fear not, my fellow fans, Juan Castillo isn't totally green when it comes to the defensive side of the ball. He played linebacker in college at Texas A&I (now Texas A&M-Kingsville) and for the San Antonio Gunslingers of the USFL from 1984-1985. He also has experience coaching defense... in high school... over 20 years ago. Something tells me you're still not exactly encouraged. 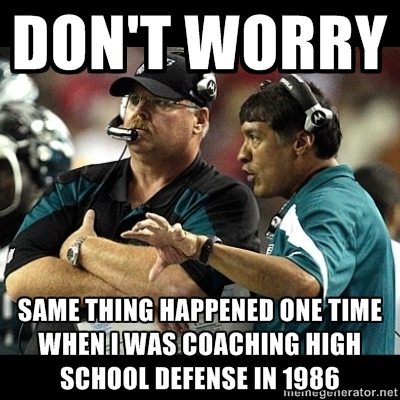 In a development much less shocking, Eagles fans are up in arms and have taken to the Internet to spew their vitriol. As for me, after getting over the initial shock, I experienced a completely unexpected feeling: calm. I can't even explain to you why. Castillo has no experience as a defensive coach of any kind at the collegiate or professional level, so rationale would seemingly indicate that hiring him in this capacity is a disaster waiting to happen. I can't blame the people who are going berserk because they certainly have a valid argument as to why this doesn't make sense. They also have every right to dismiss the hiring as an ego massage for Andy Reid (it is) and another strike against the unjustifiably haughty management structure operating within the NovaCare Complex. Believe me, I get it. I'm one of the team's harshest critics, which is why the hiring of Juan Castillo as defensive coordinator should have sent me into a violent rage. After all, this move highlights the three things I really can't stand about this current incarnation of the franchise: tedious nepotism (God forbid someone should come in and challenge Andy's way of doing things -- I guess no other team employs worthy coaching candidates), unflinching stubbornness, and a perceived we're-smarter-than-everyone-else attitude that has resulted in precisely zero Super Bowl wins. Yet I find myself not quite ready to jump off the Ben Franklin Bridge. Maybe I've become desensitized to the Eagles and their whacky ways, which is a plausible explanation. Or maybe it's because I just downed a handful of Valium. No, I've got it: The Eagles finally did something I've always given them shit for not doing, and that's think outside the box. So kudos in that respect. To be honest, what frustrates me most about all this isn't the hiring itself, it's that the Eagles didn't even bother to interview coaches from the Steelers or Packers. You really mean to tell me this decision couldn't have waited another week? It also gives me pause that Castillo is jumping over to the defensive side of the ball and right into position as coordinator. I think it would've made more sense to make him a position coach on defense first. But what do I know, right?

Yeah, pretty certain my calmness was a result of having become desensitized to the Eagles and their whacky ways. In retrospect, rereading how I tried to talk myself into Castillo's hiring is pretty humorous. Against my better judgment, it seems, I decided to give Andy Reid the benefit of the doubt when he added another ring to this circus. Mistake. Larry David would tell me I should've known better, that it's not for me. I feel for Juan, I really do, and even more so after watching his heart-wrenching post-firing interviews with Vai Sikahema and Derrick Gunn. Here's a guy who was barely even a consideration for the defensive coordinator position until the pool of qualified and available candidates evaporated. It still pisses me off that the Eagles didn't wait until after the Super Bowl to interview defensive coaches from the Packers -- like Winston Moss, Mike Trgovac, Kevin Greene -- and Steelers -- like Ray Horton, who took the job in Arizona and has punished the Eagles in their two matchups since. Andy, despite one of his exhausted Reidisms, did NOT put his longest-tenured comrade in a position to succeed. Instead, he put him in position to fail and, ultimately, out of a job. It's a sad and tragic -- if not predictable -- end, really. (Edit: Oh, and Juan Castillo was a DAMN good offensive line coach, by the way.)

Juan Castillo has been a member of the Eagles' coaching staff since 1995. The man has more than paid his dues and is universally respected. Now, while he's only coached on the offensive side of the ball, do a little bit of Googling and you'll find that he had plenty of involvement with the defense behind the scenes. Whether it was educating the front four about what to expect from the offense, breaking down protection schemes with the late Jim Johnson, or reminding players that he used to play linebacker, Castillo never strayed too far from his defensive roots. As Juan said in his introductory press conference earlier this evening, he's a "defensive guy that's gotten stuck on the offensive side." Well, after 16 years as an offensive coach, he's finally getting a chance to be that guy again -- and now he gets to incorporate everything he's learned about NFL offenses over the years into game plans aimed at attacking them. And you know something? I'm willing to give Castillo the benefit of the doubt. That said, I still think an introduction of new coaching philosophies is necessary for the Eagles to finally win a Super Bowl. So, would I have liked to see Reid take this chance to inject some new blood into the franchise at a position of power? Definitely. But maybe this isn't such a bad thing. Juan Castillo has been here a long time, and he knows what Philadelphia is all about. He also knows the organization inside and out. Speaking of which, as the Eagles are wont to do, they preemptively went into damage control mode and had the public relations staff working overtime to get input from coaches around the league about how excellent Castillo is going to be at running the defense. Granted, the statements they procured were from former Eagles coaches, but were you really expecting anything different?

Did Castillo incorporate anything he learned from coaching the offensive line for 15 years? If he did, that input was useless and sure as shit didn't work. I swear, preseason defenses have been more imaginative and complex. For someone who deconstructed protection schemes with Jim Johnson, Castillo didn't seem to have a clue how to combat them. And don't even get me started on his talent evaluation skills. I gave up on Castillo's ability to that extent when he immediately championed Casey Matthews as a capable starting middle linebacker and defensive captain. As someone who watched Matthews a lot in college and thought he'd be, at best, a reserve linebacker and special teams staple, I could not have been more vehemently against the decision.

At least Todd Bowles has credibility and provides an infusion of new coaching philosophies that weren't developed in an Eagles incubator. I like what I heard during his introductory press conference; sounded like someone who knew what he's talking about, which is a relief. This defense has talent, no question. Let's see if Bowles can harness it.

Haters gonna hate, but, for once, I won't be one of them. For all the shit I give Andy Reid, I can't deny that he has an eye for coaching talent -- just look around the league, where four of his former assistants are now head coaches (John Harbaugh, Steve Spagnuolo, Leslie Frazier, and Pat Shurmur). Need more evidence? One of his first moves as head coach of the Eagles was hiring Jim Johnson, then the Seahawks' linebackers coach, to be his defensive coordinator. As my grandfather has told me thousands of times, you don't get anywhere in life without taking risks. Only time will tell if this specific risk was calculated and shrewd or stupid and irresponsible. Juan, you have my support. Now make Jim Johnson proud.

Maybe I should never stray from being a hater. Serves me right, I guess. Live and learn.

PS - What's flying under the radar with all the uproar about Castillo taking over as defensive coordinator is the fact that Reid lured Howard Mudd, formerly of the Indianapolis Colts, out of retirement to coach the offensive line. Mudd's lines were some of the best in the league during his 12-year stint with Indy, and Peyton Manning swears by him. Yeah, I'm on board.

The Jason Peters and Jason Kelce injuries have irrevocably ruined the offensive line. It is a certified dumpster fire that not even Howard Mudd can salvage (at the moment).

Next change on the docket: Andy Reid comandeering play-calling duties from Marty Mornhinweg. It's coming, I can feel it. (Edit: Well, it's not coming just yet. But if the offense continues to struggle and underperform, I imagine Andy will take over play-calling responsibilities in an effort to control his own fate.)