Philadelphia Eagles: Evaluating the offensive line at the bye

John Breitenbach takes a look at the state of the Eagles' offensive line at the bye.

Share All sharing options for: Philadelphia Eagles: Evaluating the offensive line at the bye

Entering the second year of the Mudd plan I expected this unit to improve on a solid foundation in 2011. After Jason Peters went down that hope was quickly dashed but I at least thought the rest of the unit could improve to a level where overall, they could be as good. That hasn't happened however and the loss of Jason Kelce, also for the season, has weakened the offensive line even further. The lack of depth is of particular concern as another injury will surely cripple a line that has failed to adequately protect a brittle QB or open up holes for one of the league's best runners. Let's take a look position by position.

Demetress Bell started off number one but it quickly became clear he was having trouble adjusting to Mudd's techniques. After playing well in Buffalo I had a lot of hope he would step up but that didn't happen and King Dunlap ended up the starter Week 1. Dunlap played pretty well in the first two games, but then got hurt and has been out since. Bell was then given a chance to prove he deserved the contract the Eagles gave him in five consecutive starts but failed to deliver. Here's a comparison of their pass protection:

*All statistics courtesy of PFF

As you can see, Dunlap's been about twice as effective in pass protection than Bell who has already given up 24 combined pressures. It's worth noting that Dunlap didn't have the toughest of assignments against Cleveland and Baltimore but he did a solid job nonetheless. In contrast Bell has been pretty terrible. It's not just the rate at which he's giving up pressure, it's also how he's giving it up. A number of rushers have come free inside Bell, putting Vick under pressure immediately. He's also made some serious mental errors, blocking inside when edge rushers have come and the defense has only rushed four.

Here's a comparison of a couple of their plays in the run game. 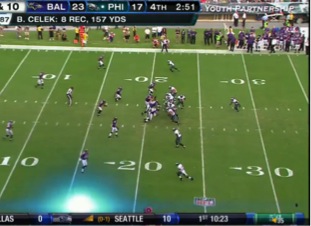 Bell's at left tackle with Celek to his left, note the line of scrimmage is the 21. 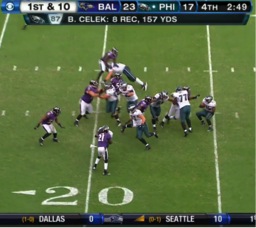 Courtney Upshaw, a rookie, beats him inside four yards in the backfield for a big tackle for loss.

In contrast watch Dunlap against the Browns on an outside run to his side: 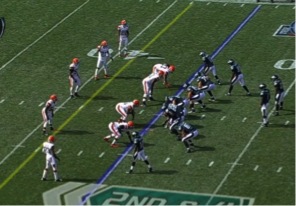 Dunlap's at left tackle with the tight end lined up beside him. 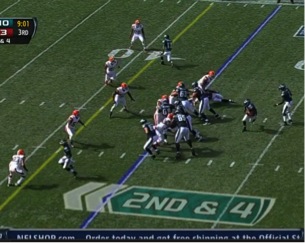 He gets out his stance quickly and into good position to seal the defensive end inside. 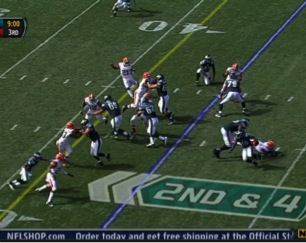 Dunlap uses the defensive ends momentum to keep him inside and away from McCoy who's able to get around the corner.

Clearly Evan Mathis is the Eagles' best lineman at the moment but even he hasn't played up to his 2011 standard. Perhaps the loss of Peters beside him is the reason but Mathis has made a number of uncharacteristic mistakes, especially in pass protection, that you wouldn't normally see.

I'm not suggesting Mathis has played badly but he's already given up more QB hits and the same number of penalties than in all of 2011.

After criticising his pass protection, it's only fair to once again recognise his impressive run blocking. He feasts on defensive players and especially likes getting to the second level to take out linebackers.

Obviously the left guard on this play: 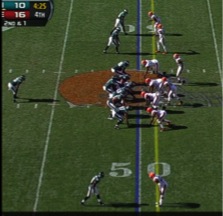 He gets his hands on D'Qwell Jackson just to the right of the hash. 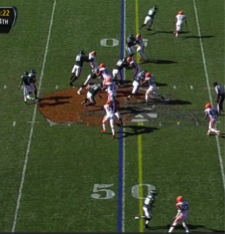 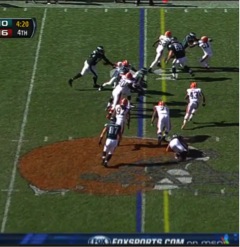 And ends up depositing him outside the numbers.

I was very critical of Jason Kelce as a rookie but he really looked improved in the first game of his second season. It's a shame then that he got hurt, and more of a shame considering Dallas Reynolds has struggled in his place. The snapping errors, communication breakdowns and poor general play are a significant issue for this team, and that doesn't look like changing any time soon. He's been thrown into a tough position but he's looked clearly overmatched in every game so far especially against the Giants.

In fact Reynolds has given up more pressure than just one other player in the league (who's played more snaps) and he's allowed his QB to be knocked down five times which leaves him third worst.

He's also pretty poor in the ground game. Reynolds was abused by both the Lions and Giants. Here's one play by Nick Fairley in the Lions game. 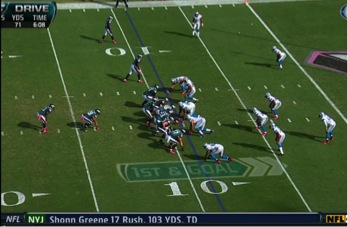 Fairley lines up right over him. 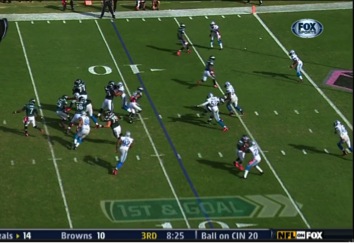 This one is really ugly as, having snapped the ball from the ten, Reynolds now finds himself all the way back at the 14 where Fairley makes the play.

Probably the player I've been most disappointed in this year is Danny Watkins. After losing his starting spot in training camp last year he seemed to get better through 2011 to the stage where I was hopeful he would continue that improvement and prove the player the Eagles thought they were drafting last April. But if anything Watkins is worse, which is hard to believe. To see their 27 year old second year player take a step back has to be a big blow to the organisation that drafted him.

Much like Reynolds, Watkins has been terrible in pass pro. His seven QB knockdowns allowed leaved him tied at the bottom of the league and he's also given up a large number of hurries. When Watkins has been beat, it's been clean, leaving Vick exposed to big hits. He simply can't get it done 1-1 against even average defensive tackles.

Credit where it's due, Watkins has been better in the run game. Still I wouldn't go so far as to say he's been good in that facet and it certainly doesn't make up for the poor pass protection.

Here's the good, as he seals Rocky Bernard away from an inside run. 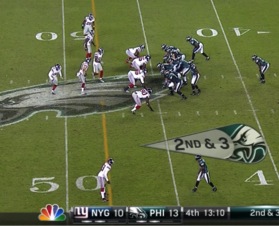 Watkins is just to the right of McCoy. 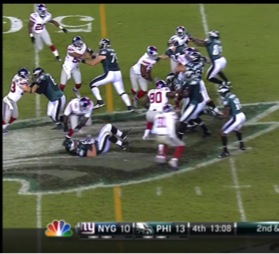 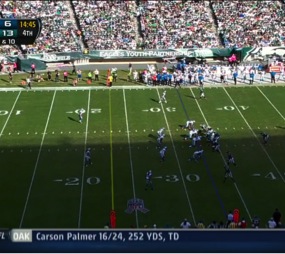 Look how far Fairley gets into the backfield before making the tackle. 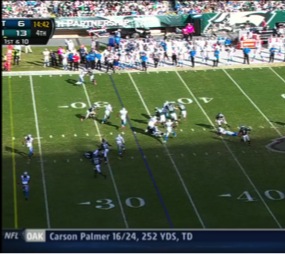 Although the numbers aren't pretty, Herremans has been unlucky in that he hasn't done a terrible job on a couple of the hits and the pair of sacks he's conceded. Herremans has also played the most pass snaps of any offensive tackle.

There have been few standout blocks for Herremans but here's an impressive play in the Week 2 win. 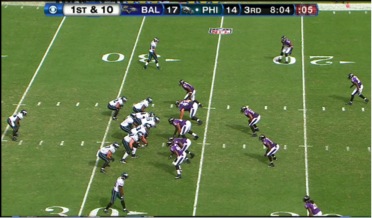 He gets a nice push here on Arthur Jones, the LE, who starts a yard outside the hash. 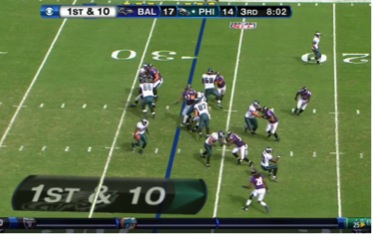 And ends up a good few yards to the right between the hashes.

The Eagles offensive line have definitely not played well to this point and I don't think anyone would deny that but there are some reasons for optimism. The return of Dunlap (I don't see Bell starting for much longer) will sure up the left side and Watkins has the potential to be a good right guard. Even Reynolds should improve with experience, although they may be wishful thinking. I really think if Watkins can improve this unit can be good enough to get the team places but that's a big if.