Share All sharing options for: Philadelphia Eagles Wide Receiver DeSean Jackson Was Pulled Over En Route To His Own Charity Event

TMZ is reporting Philadelphia Eagles Wide Receiver DeSean Jackson was pulled over and forced to perform a roadside sobriety test Saturday morning en route to his own charity event. The four year veteran was allegedly detained for driving a vehicle with tinted windows and suspected of drunk driving.

Jackson was eventually allowed to leave without a ticket. Check after the jump for a photo. 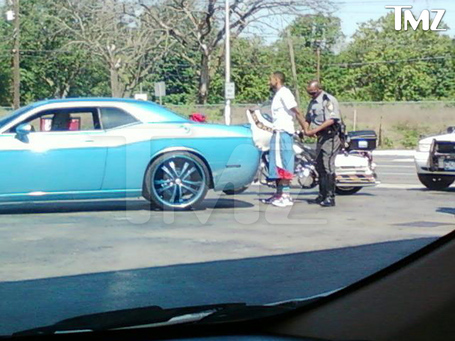 According to witnesses on scene, during the police stop, the officer handled Jackson roughly and raised his voice to the Eagle. Reports say Jackson was cooperative throughout the incident and did what was asked of him. DeSean was eventually released without a ticket, raising the question of whether the detainment was even necessary.

DeSean Jackson is a champion against Pancreatic Cancer and runs Foundation 10, his own foundation to search for a cure. Today's charity event was to be held at the Trinity Baptist Church in Philadelphia to promote screenings and raise awareness for personal health.

For more on the Philadelphia Eagles, including DeSean Jackon, check out Bleeding Green Nation.