Santa Rosa, California is home to both the beginning and the end of stage one of the 2012 Amgen Tour of California. There are two neutral laps through the city, and then the route loops out and back to Santa Rosa for a total of 115.9 miles. There are intermediate sprint stages, so the fight for the points jersey should break out immediately. There are climbs in the stage as well, so the King of the Mountains jersey will also be contested. Those climbs are not particularly severe, but the descents are fast and tricky, and as they move along the coast the wind can always complicate things. The stage flattens out towards the end, giving all of the sprinters and their teams time to set up for what should be a tightly contested finish on the run in back to Santa Rosa. 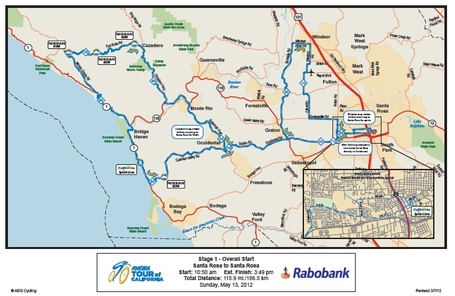 Because the Tour of California isn't as long as the larger European races, the overall win contenders tend to start looking for their opportunities as early as possible. Defending champion Chris Horner (Radioshack-Nissan) will be eager to show he can win twice in a row, while men like Tom Danielson from Garmin-Barracuda, Tejay Van Garderen (BMC), and Vincenzo Nibali (Liquigas-Cannondale) all keep an eye on each other. Scott Zwizanski and Mike Friedman, the two Pennsylvania men riding for Optum Pro Cycling, will both be looking to prove that this year's Optum roster can do better than last year's, which never placed better than 5th on any given stage.

Stick with this storystream for updates throughout the Tour, and SB Nation's cycling blog Podium Cafe has all the cycling news and analysis you need.