The Knicks Have Rings... Remember?

Share All sharing options for: The Knicks Have Rings... Remember?

This is almost too funny to be true, but it most certainly is. The NBA store is selling t-shirts for Knicks fans which say "Got Rings? We Do!" meant to boast the two NBA title the franchise has won.... back in 1970 & '73. 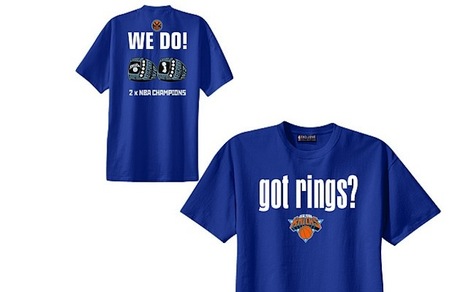 Just to point out some of the 800 things that makes this so pathetic... It's been almost 40 years since the Knicks have won a title, so this shirt is less of a boast than a harsh reminder of how long it's been. Plus, the shirts are a direct ripoff of the Yankees "Got Rings" shirts which can be seen worn around New York City. The difference of course is that the Yankees have 27 rings and have recently won one. Being as though they're in the same city, it makes the Knicks shirts look all the more pathetic.

That said, these ridiculous shirts aren't simply limited to the Knicks. You can buy the same shirt commemorating the Sixers three NBA titles if you like. My advice? Don't.