An Inside Look at SportsRadio WIP’s Wing Bowl XX

See what goes on backstage at the biggest party in Philadelphia, SportsRadio WIP's Wing Bowl XX.

Share All sharing options for: An Inside Look at SportsRadio WIP’s Wing Bowl XX

It has taken me a week to literally digest what I witnessed last Friday morning. An event unlike any other...Sports Radio WIP's Wing Bowl XX. Or as my brother put it best; "Debauchery at its finest."

It began early Friday morning as I walked quickly through the mostly intoxicated crowd outside the Wells Fargo Center. The sun had not yet risen, but the party had already started. After convincing an angry security guard that I was in fact a member of the media, I received my press pass and entered the carnage.

As I made my way through a sea of thongs, cleavage (male and female), and elaborate floats I encountered a man wearing a cape and underwear confidently talking to a busty female. A group of shiny Mummers walked by and waved to the bearded man in a trench coat.

All this before actually entering the floor of the Wells Fargo Center for SportsRadio WIP's Wing Bowl XX.

Wing Bowl is a tradition which began in a hotel lobby and evolved into the biggest party in South Philadelphia. Around 20,000 fans were in attendance to watch competitive eaters down as many wings as possible during a half hour block. Although that is just a portion of the entertainment.

"I came for the boobs," a friend of mine in attendance told me. "It's like Mardi Gras, without the beads." Inhabitations seem to go out the window, as women from the sold out crowd were put on the big screen.

The sun had just risen at 6:30 in the morning, and I found myself in a locker room with a small overly polite Japanese man. Takeru Kobayashi, stands 5'8 inches tall and weighs only 128 pounds. Despite his small stature, he is defying the laws of physics, chemistry, biology, and pretty much every other science, becoming the most feared competitive eater in the world.

I had met with Kobayashi earlier last week as he took his publicity tour throughout the city of Philadelphia. Through his translator Maggie James, Kobi described his uncanny approach to eating. "I'm very good at swallowing food whole, so I'm going to use the technique I'm good at. I'm very good at saving the energy in my jaw. I envision myself winning by swallowing."

Takeru Kobayashi, for the past ten years has developed a physical advantage over the competition; however it is Kobi's mental approach that is so fascinating. He is able to separate himself from the "competitive eater Kobayashi" to just Kobayashi. This split personality allows for interesting out of body experiences. "I look at that guy from a third person perspective and think, ‘Wow, he is really interesting, he's kind of crazy'," Kobayashi's translator Maggie told me.

An assortment of guests began arriving in Kobayashi's locker room, including legendary Philadelphia Flyers goaltender Bernie Parent, and maker of the best sandwiches in Philadelphia, Tony Luke Jr., both participants in Kobi's entourage.

Unbeknownst to me, I would also have a first hand look at what it's like to be part of an entourage. As the eating legend entered his boxing ring float, along with Parent and Luke Jr., a small contingency of reporters followed behind to capture the entrance.

Although I have been severely booed at times during my playing career, it was a little humbling to experience it from the Philadelphia faithful. Fans spat venom at the foreign favorite as he made his way to the stage. T-shirts and empty beer cups were heaved at our general direction. This is a situation Kobayashi was not anticipating. He had described how he wanted to be embraced by the Philadelphia crowd and not jeered by it. This is why his entrance channeled the movie Rocky and featured two beloved Philadelphia personalities.

The crowd did not notice his homage to our fair city, instead only recognized he was not a local, and was trying to, once again in our long tortured history, take a championship away from Philadelphia.

Kobi stepped off his float and calmly walked to his assigned seat, directly underneath host Angelo Cataldi. Once he sat down the competitive Kobi awoke.

I spent the next hour watching wings turn into bones, dodging security who despite my press pass, kept trying to kick me off stage, tracking down my cameraman, who would disappear then return ten minutes later with a memory card full of Wingettes, and occasionally checking out the big screen for a shot of a coed with lowered self-esteem, humiliating herself to the delight of the crowd.

337 wings later Kobayashi stood atop the table, in a familiar Rocky pose, as he was crowned champion of WIP's Wing Bowl XX.

After a brief interview and several Q and A sessions, Kobayashi retreated to his locker room to take a break from the action. He sat down, closed his eyes and meditated. Thirty seconds later the shy, smiling, humble man, returned to the body of Kobayashi and the ultimate competitive eater disappeared.

With his 337 wings, Kobi raised $3,370.00 on behalf of Cherry Hill Imports, who had pledged $10.00 for every wing he ate. The donation will fund 7740 meals for needy families in the Delaware Valley through the organization Philabundance.

As the crowd filed out berating the Asian population, Wing Bowl XX officially came to an end. A morning of filled bras and bellies was over, and the future of the contest unknown. If next year finds another disappointing Philadelphia Eagles season, expect to see the humble Japanese man, once again, transform himself to the delight or anguish of 20,000 fans. 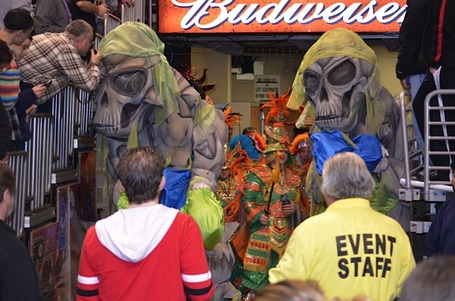 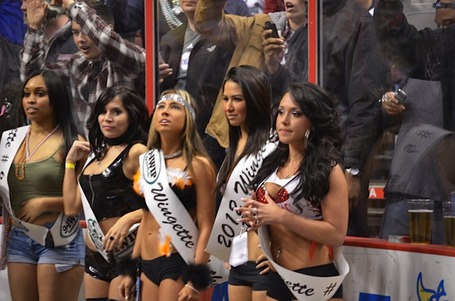 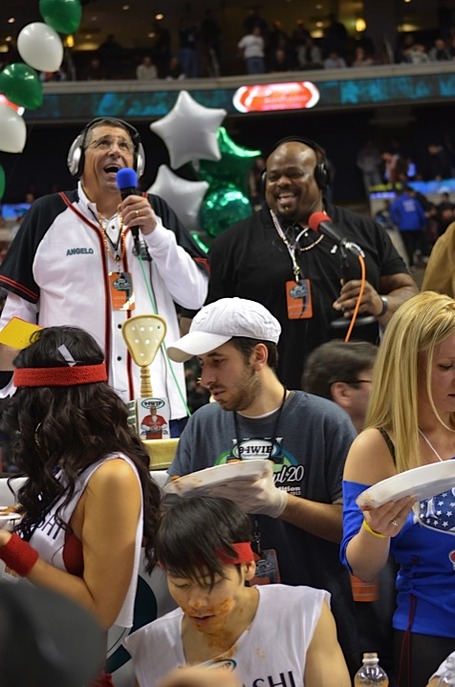