Early Friday morning during practice for the BBVA Rising Stars Challenge, also known as the Rookie/Sophomore game, Philadelphia 76ers guard, Evan Turner, set a new Guinness World Record for 'most shots made from behind the backboard in a minute' with 14.

Below is a video of what appears to be the tail-end of Turner's record-setting shots, via NBA's Twitter.

And yes, according to the Sixers Director of Public Relations, Michael Preston, the record has indeed been verified. Below is a picture from Preston's Twitter of Evan holding his new ... world record? 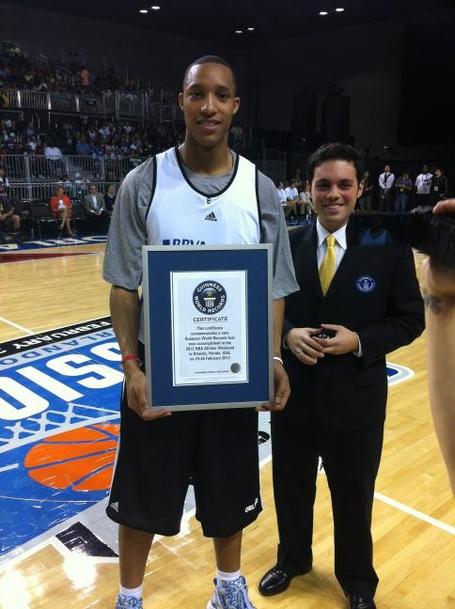 The second overall pick in the 2010 draft was left out of the Rookie/Sophomore game all together last season and was not good enough to be selected, but rather assigned to Charles Barkley's team, after Chuck and Shaq – the GMs of the two teams – held a draft including all of the eligible first and second year players.

Clearly, this record proves Evan is the best player in the NBA.

For more 76ers coverage, visit our team page or our blog Liberty Ballers. For more on the NBA's All Star Weekend, visit our StoryStream.