With less than two minutes remaining the first game of the 2012 NBA Playoffs for the Chicago Bulls, their star point guard went down with a potentially devastating knee injury. Rose crossed over Spencer Hawes, drove to the basket and appeared to tweak his knee as he planted during his hop step. He grabbed for his knee immediately and grimaced as he lay on the ground, in pain. The medical staff examined his knee before helping him to the locker room. Video of the injury is below:

The Bulls went on to win the game, but the Derrick Rose injury could end any and all hopes the Bulls had at making it out of the Eastern Conference and winning the NBA Championship. Rose has missed time all season with various injuries, and the Bulls have played well in his absence, but without him they're probably not going to beat the Heat or Celtics in a seven game series.

The reigning MVP averaged 22 points and eight assists in 29 regular season games in 2011-12. Here's a picture of him being helped off the court: 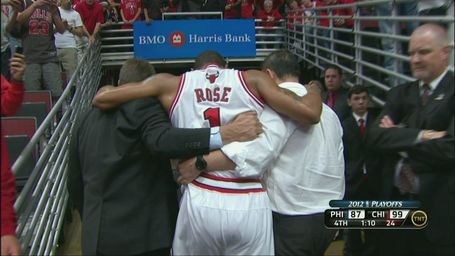