Andre Iguodala's pair of free throws with two seconds remaining in Game 6 gave the Philadelphia 76ers their first NBA playoff series win since 2003, and marked just the fifth time in league history an 8-seed has knocked off a 1-seed. As you can imagine, fans were just a little bit excited after the game.

We have you covered in video, gif and photo form after the jump. 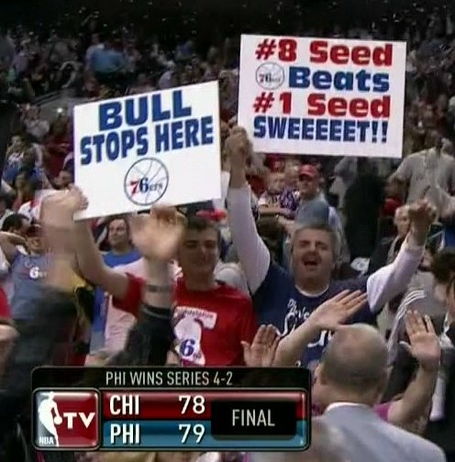 The 76ers will face some team in the second round, either the Atlanta something-or-others or Boston whatever-who-cares. Tonight, Philly fans have earned every right to party after what has been an otherwise ugly week of sports between the Flyers and the Phillies. Thanks be to Andre Iguodala, and his sudden penchant for clutch late fourth quarter free throws.

For more on the 76ers, please be sure to visit our blog Liberty Ballers and SB Nation Philly for all the latest news and updates.