Drew Rosenhaus is a smart guy. He knows how the NFL works and he knows how to play the media. He's part shark, part carnival barker and his many skills were on full display as his client, Plaxico Burress was released from prison this morning. The former Giant sported a Phillies cap, a not so subtle nod to Burress' interest in playing for the Eagles when the lockout ends. Don't put it past Rosenhaus to have placed that cap on his head.

Rosenhaus says that Burress will be in demand when football returns.

"He will play in the NFL this year," Drew Rosenhaus, Burress' agent, said in an email to The Associated Press. "Many teams want him. He will be a top free agent. He is healthy and ready to go. He will be signed shortly after the lockout ends."

Of course, we know the problems here. He's 34 years old and just spent the better part of two years in prison. Neither conditions that make for a "top free agent." At best, Burress will get an incentive laden deal that a team can get out of any time. But will that be from the Eagles?

We know for basically a fact that Burress wants to come here. He said as much to his former teammate Brandon Jacobs.

"I would hate to see him go to where I think he is going to go, that is from talking to him," Jacobs said of the Eagles when asked if he was talking about Philadelphia. "It is pretty tough to deal with all those different combinations. Plax is a Virginia guy, Vick is a Virginia guy. They went through sort of the same things and they got a lot of dynamic players down there. It wouldn't be a bad thing, he thinks, to go down there."

And now of course he waltzes out of prison with a Phillies cap on. You can expect to see plenty of stories over the coming weeks with "sources" speculating on the Eagles interest. Smart money says that half of those sources will simply be Drew Rosenhaus himself.

As of yet, the Eagles have expressed no interest and no reports have made any confirmation of any interest on their part. We've seen mostly just speculation. So the Rosenhaus campaign is underway, will the Eagles bite? 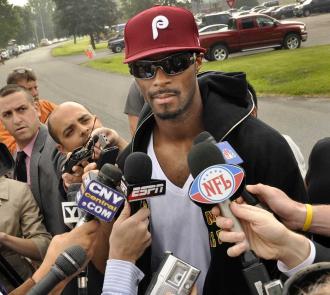 Castillo: Casey Matthews And Other LBs "Will Be Ready"