Eagles And Phillies: The Weekend That Was...

The Eagles and Phillies both made major moves on Friday within three hours of one another. Moves that each team hopes will put it over the top in the quest for a championship. Now that the fireworks are over and the dust has settled, it's time for the teams to live up to the hype by producing the desired results on the field.

Share All sharing options for: Eagles And Phillies: The Weekend That Was...

So, that just happened. Not sure if you heard, but the Eagles and Phillies won the Super Bowl and World Series Friday, both within three hours of one another. Pretty impressive feat, right? What's that, neither won their respective sport's championship? You're sure? I could've sworn they did. Maybe it just felt that way, given the reaction from fans and media members alike. It's too bad both teams still have to go out and, you know, actually play the games. And win those games.

A little after 6 PM Friday, right when NFL teams were allowed to officially start signing free agents, word started to leak out that a certain mystery team -- not the "favored" Jets or Cowboys -- was on the verge of inking Nnamdi Asomugha, the most prized player on the market. Within half an hour, Adam Schefter reported that team was the Eagles and confirmed a deal was done: five years and $60 million, $25 million of it guaranteed. That means Asomugha (probably) took less money to join the Eagles, which, he admits, was the team he targeted back in March. Well, then. I guess the big boys weren't bluffing when they said they had "big plans" for this offseason. And you know who was wrong for doubting them? Yours truly. Honestly, why are you even reading anything I write? Talk about a swing and a miss. Then again, I have no problem being wrong when it means making the team better. In fact, I love it and am more than happy to admit my misstep. Now, if only Andy Reid and the team itself follow management's lead and prove me wrong on the field (see: more balance on offense, less choking and overall in-game buffoonery).

The Eagles weren't done after winning the Asomugha sweepstakes, however, and continued their spending binge. On Saturday afternoon, the team signed Cullen Jenkins to a five-year, $25 million contract. What's more, according to Michael Lombardi, the Jenkins contract becomes a one-year, $4 million deal if the team chooses to cut him after the 2011 season. How the hell did Howie Roseman and Joe Banner pull that off? Jenkins, when healthy (and that's been the biggest problem over the course of his career), is easily one of the league's best inside pass rushers and will look fantastic next to Antonio Dixon at defensive tackle in Juan Castillo's 4-3 scheme (I'm sure he'll rotate in at defense end, as well). A Cole-Jenkins-Dixon-Babin alignment on the defensive line? Sexually arousing. Jim Washburn must be doing cartwheels right now.

Let's stop and think about things for a second: With the addition of Jenkins, that makes the third player 30 or older the Eagles have signed so far. All three have been marquee signings, too. Talk about a change in philosophy. I guess desperate times call for desperate measures, and these are desperate times in Philadelphia. These next three seasons (should) represent Andy Reid's last chance to win a Super Bowl as the head coach of this football team, and management is going for it. Everyone in the organization, like the fans, is tired of getting close and losing. FUCKING FINALLY. The Eagles have pushed all their chips into the middle of the table. This is like the 2004 offseason all over again, and, somehow, I don't think the maneuvering is quite finished yet. Hopefully one of their next moves -- after addressing other, more pressing needs -- is to negotiate a new contract for DeSean Jackson, who will show up to training camp on Thursday, lest he start to get fined $30,000 for each unexcused absence.

After the Jenkins signing, the Eagles shipped Brodrick Bunkley to the Browns for a fifth round pick; when the terms of the deal were not met (he didn't report to Browns training camp), the Eagles instead traded Bunkley to the Broncos for a 2013 draft pick. I don't care as much about the return as I do the fact that the move frees up an extra $2 million in cap space. Now, what to do with Asante Samuel? With the additions of Asomugha and Rodgers-Cromartie, will he be dangled as trade bait? I'd rather keep the trio of Pro Bowl cornerbacks because you can never have too many guys who can defend the pass. It's an embarrassment of riches and a luxury that should not be taken for granted. Also, if Samuel is retained, it appears as though Juan Castillo is flirting with casting Asomugha in a Charles Woodson-esque role, which means he'll line up all over the defensive formation and be used as a cover corner, spy, and blitzer. However, if the Eagles can use Samuel to get an impact player at another positon of need -- right tackle, linebacker, or even safety, for example -- it's something the front office should (and will) seriously consider.

Update #1: Ronnie Brown has signed a one-year deal with the Eagles. Next up: sign reinforcements at linebacker and safety. While Brown's not exactly a classic power back for those short-yardage situations nor the player he once was, he does represent an ideal backup to LeSean McCoy. But will he stay healthy?

Update #2: The team also just signed offensive tackle Ryan Harris and safety Jarrad Page in two shrewd, under-the-radar moves that could pay big dividends. Harris looked like a future Pro Bowler in 2008, but his career was derailed in 2009 when he suffered two dislocated toes and was put on injured reserve. Last season, he was hampered by a nagging ankle injury, struggled to find his place in Josh McDaniels's offense, and didn't fit in with what the offensive line coach looked for in his charges (which is to say that Harris relies on agility and athleticism rather than size and brute strength). A fresh start could do wonders for Harris, especially when you consider that he'll now be working with Howard Mudd, who prefers smaller, more nimble linemen. Don't be surprised if he ends up being the Eagles' starting right tackle in 2011. Jarrad Page will provide depth at safety and has starting experience (put up good stats, too) from his years with the Chiefs.

The good: The Eagles are loading up and doing everything within their power to assemble a Super Bowl-worthy roster. The bad: Vince Young (love the signing, by the way) already invoked the "Dream Team" moniker, to go along with Jason Babin tweeting, "I feel like we are the Miami Heat of the NFL." Ugh, shut up. Both of you. Already there's lots of talk coming from a team that hasn't won shit. Rob Ryan is right, the Eagles definitely win the "all-hype team" award. But let's not forget what the Eagles have, for the most part, had trouble doing on the field over the last decade: Producing results that meet the hype. 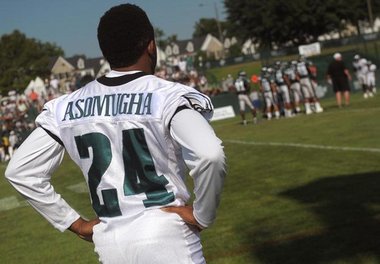 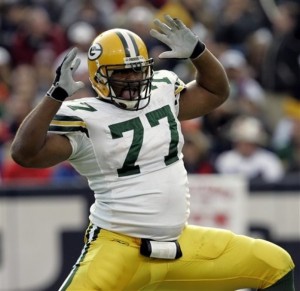 Not to be upstaged by their in-city rivals, the Phillies countered the Asomugha signing by finalizing a trade for Hunter Pence in the middle of Friday night's game against the Pirates. Could the timing of the trade merely have been a coincidence? Of course. But I prefer the alternate, more puerile theory. If you're unfamiliar, the Phillies and Eagles despise each other. The two organizations have had a contentious relationship dating back to their days sharing the Vet and continuously fight for sports supremacy in this town (although the bitterness and, well, jealousy seem much more palpable on the Eagles' end). Whenever one team makes a headline-grabbing move, you can almost always count on the other to respond in kind.

From 2000-2006, the Eagles owned Philadelphia. Much to their dismay, however, the Phillies have passed them as the class of this city over the past four years, with 2008's World Series championship being the moment of crystallization. I always joke -- well, half-joke -- that the only people in town unhappy when the Phillies won the World Series were the head honchos within the Eagles' organization. A little over a year after making the playoffs for the first time since 1993, the Phillies had already accomplished the ultimate goal that had eluded the Eagles' grasp. The Phillies were winners with a never-say-die attitude, a team that always rose to the occasion and answered the bell. They resonated with the fans more than the Eagles teams that always found ways to lose and seemed to lack the gumption and fire to come through in the clutch, as well as a desire to connect with the people of this city on a fundamental level. Really, the Phillies were (and still are) everything the Eagles were not.

As for the Pence deal, it's precisely what the Phillies needed. He's not your classic power hitter and sports an .817 career OPS, but he is coming off three consecutive 25-homer seasons (despite currently only being on pace to finish 2011 with 16) and provides protection for Ryan Howard in the lineup. More than anything, however, it's Pence's youthful exuberance and infectious energy that make him the perfect fit for this team and this city. I think his attitude is going to invigorate the other players on the team, too, and there's not a single person in the clubhouse or the stands who won't love the way he plays the game. That's because Pence plays it the right way: hard, and with reckless abandon (he has a lot of Chase Utley in him in that regard). He always busts his hump nonstop, and it took one at-bat in a Phillies' uniform for everyone to see what he's all about. Pence hit a grounder up the middle and started hauling ass down the first base line, legs gyrating, arms flailing, head bobbing. It's one of the more beautifully awkward sights you'll ever see on a baseball field. The Pirates' second baseman, Neil Walker, ranged to his right, backhanded the ball, and threw over to first as his momentum carried him toward left field. Pence, hustling the whole way, beat the throw by a good half-step. Umpire Angel Hernandez called him out anyway. Never mind the blatantly blown call (which was just mindbogglingly awful), we all knew immediately what we had in Hunter Pence.

There was a time earlier in July when I thought Ruben Amaro, despite Charlie Manuel's constant pleas to get a right-handed bat, might just end up standing pat at the trade deadline because the cost to acquire a player like Pence would be prohibitive (I surmised Vance Worley or Domonic Brown would have to be part of any deal, in addition to Cosart and Singleton). In hindsight, that was a pretty foolish conclusion. This marks the third time in as many years as Phillies general manager that Amaro has made a major splash at the deadline. In 2009 it was Cliff Lee, last year it was Roy Oswalt, and now it's Hunter Pence. So far, so good, as the team is 3-0 with Pence in the lineup -- two of the games have been of the late-inning comeback variety. Now, that's more like it. 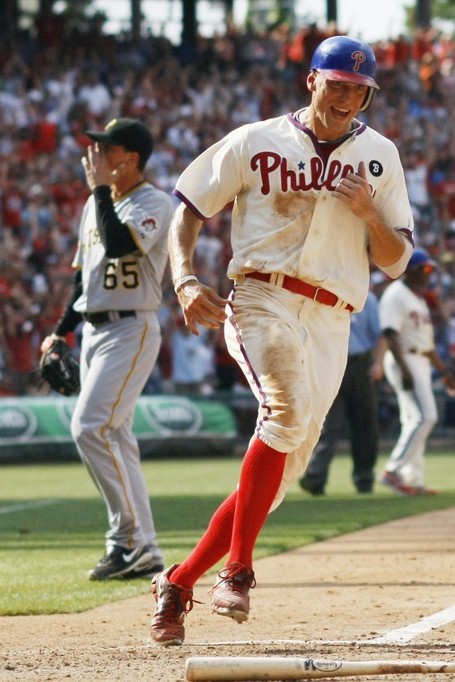