The Eagles open their 2011 campaign today at 1pm eastern in St Louis against the Rams. It is the 39th time these teams have met with the Rams holding a slight 19-18-1 advantage in the overall series. It is actually the third time in the last 11 years that they've met on opening day. Today's game will be on FOX with play by play from Thom Brennaman and color analysis from Brian Billick. Radio coverage will be on both 610-am and 94.1 FM with Merrill Reese and Mike Quick

Be prepared to see a lot of familiar faces on the Rams today as they are filled with ex-Eagles. Head coach Steve Spagnuolo was an assistant on the Eagles defensive staff for nine years. In addition to a number of guys from his coaching staff, Spags has also brought in former Eagles A.J. Feeley, Quintin Mikell, Danny Amendola, Al Harris, Brandon Gibson & Stephen Spach.

It will be a big day for Michael Vick, who makes his first start on opening day since 2006 when he led the Falcons out against the Panthers. That was 1,827 days ago. Another guy to watch will be LeSean McCoy, who has had some big games in domes in his young NFL career. Last season in two dome games against Detroit and Dallas McCoy rushed for a total of 269 yards, three touchdowns and an amazing 8.4 yards per rush.

Here's the coverage map for the 1pm games from the506.com. All the areas covered in blue will show Eagles vs Rams. 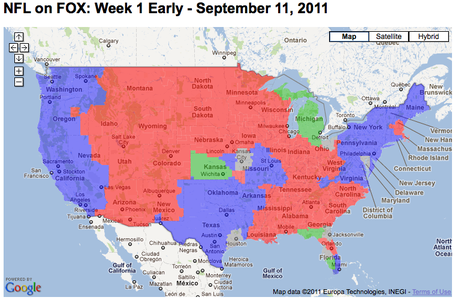 For more Rams Vs Eagles coverage check out our full storystream and chat about the game with Eagles fans at Bleeding Green Nation.