Inside The Linc: A Behind-The-Scenes Look At The Eagles' Stadium

There's always a lively atmosphere at the Eagles' stadium--one I'd like to share with you in a behind-the-scenes look at the state-of-the-art facilities at Lincoln Financial Field.

Share All sharing options for: Inside The Linc: A Behind-The-Scenes Look At The Eagles' Stadium

Since 2003, the Eagles have been in action at one of the NFL's most well-regarded stadiums, Lincoln Financial Field. But how many people have experienced the Linc from the inside? Even if you've absorbed the passion of Philadelphia by attending a game at the home of the Eagles, few have gotten the chance to take in the wonders of what goes into making Lincoln Financial Field one of the most vibrant stadium complexes in the league. Unfortunately for the Birds, there will be no playoff games hosted in the City of Brotherly Love this year, and all the players have departed from the Linc, but there's still a lively atmosphere at the stadium--one I'd like to share with you in a behind-the-scenes look at the Eagles' state-of-the-art facilities: 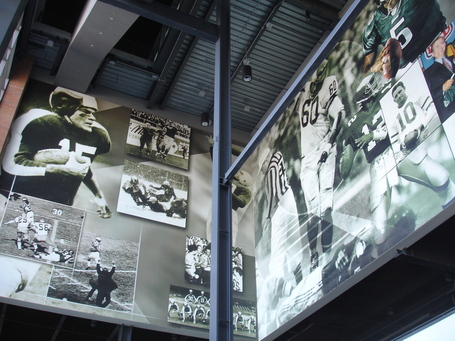 The Eagles like to weave their own history into their facilities, and that is ever so clear in the lobby of Lincoln Financial Field. Inside the team's official apparel store, the Pro Shop, the walls are lined with plaques of every player in Philadelphia history who has been voted into the Pro-Bowl. In the lobby itself, a high-ceiling area that leads into all areas of the stadium, from regular game-day seats to presidential suites designed for the likes of Eagles owner Jeffrey Lurie among others; gigantic pictures of legendary Eagles cover the walls. From Chuck Bednarik's famous black-and-white pose over Frank Gifford to the memorable image of Donovan McNabb holding up his draft-day jersey, the lobby images bring back plenty of Eagles moments. The team's progression of on-field uniform styles, as well as decade-by-decade accounts of significant accomplishments, are also featured in the welcoming area.

This might not be as interesting to some, but the press box in the stadium has its fair share of intriguing facts. The majority of Eagles fans are not also employed to report about the team, so they likely aren't aware of the rules pertaining to the Linc's press room. The area itself isn't anything special, but the chairs are comfortable and the view is as good as it gets in terms of the field. The spectating area is covered with huge glass windows that prevent any sounds from the field/crowd interfering with the press work, while various TVs fixed atop the windows broadcast games on a 30-second delay to allow writers a chance to catch any action they may have missed, but need to watch in order to analyze. The top row of seating in the press box is reserved for statisticians, who also are accompanied by sets of telephones used to communicate with those on the field responsible for making note of broken records or noteworthy achievements on the field. Important rules of the press room include the prohibition of wearing Eagles colors, openly cheering for a certain team, and wearing a black shirt along with black pants, which would indicate support for the Raiders in the event of a game vs. Oakland.

Fans have access to the club-level suites if they fork over a decent amount of cash for game tickets, but certain sections, such as the presidential/luxury suites, are quite a marvel. In the highest-end rooms, there are sofas, televisions, refrigerators, and even fireplaces. Club-level customers also have access to an exclusive food court and certain hallways in the complex, all of which are lined with historical plaques recognizing significant events in the city of Philadelphia as well as the history of the franchise. From the club-level suites, fans have arguably the best view of the field without risk of enduring the weather and/or rowdy behavior, in addition to a perfect glimpse of the architecture Lurie has intentionally incorporated around the stadium.

The tunnels at the bottom of the stadium are one of the many areas fans do not have access to during games, but would likely enjoy experiencing. There's nothing fancy about the basement-level area in terms of Eagles-themed decorative architecture, but there are a number of places the tunnels lead to. From the walkway in which players and coaches are introduced to the crowd upon entering the field to select rooms meant to house the wives and children of players, there is no shortage of passages at the bottom of the Linc. Also the unofficial roadway for injury and trainer carts, the stadium's tunnels also include the post-game press room where head coach Andy Reid and quarterback Michael Vick are contractually obligated to appear for interviews following each home matchup (a $25,000 fine results as a penalty for missing the post-game conference). Small desks fill the room, in which no pictures are permitted; only broadcast video is allowed within the tunnel's press room. The tunnels also lead to... 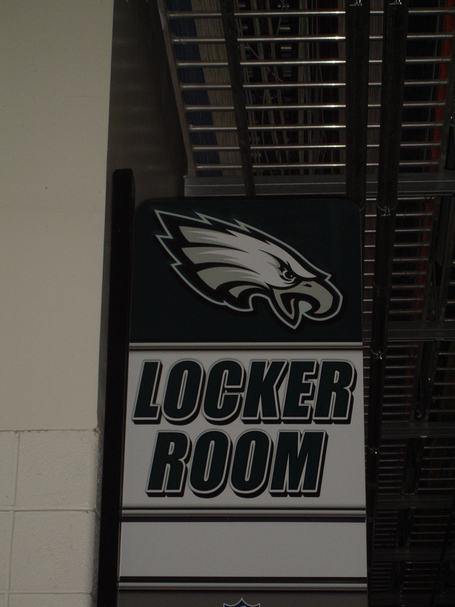 Perhaps the liveliest area of Lincoln Financial Field when the players are not on the field, the locker room is the place where coaches meet and discuss strategies, evaluate player injuries, and, of course, where the Eagles get into gear and suit up for on-field action. A large, carpeted area in which post-game interviews are also permitted for certain periods of time, the locker room is a high-quality changing room if there ever was one. There's plenty of space and each locker is accompanied by an Eagles-themed name plate identifying all members of the team's active roster. 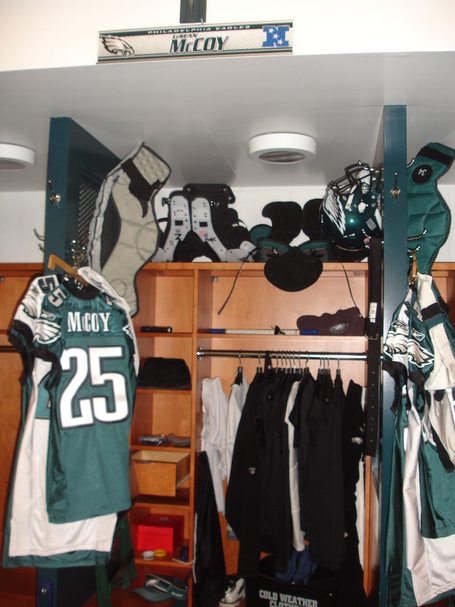 As of January 7, almost a week after Philadelphia's 2011 campaign came to a conclusion following a win over the rival Redskins, each players' locker still held shoulder pads, at least a few pairs of shoes, a hat or visor, a couple of black undershirts, and white and midnight green-colored jerseys with their respective number. For the obsessive fans, Vick and cornerback Dominique Rodgers-Cromartie were among the few players with extra belongings left over; each had--wait for it--a bottle of cocoa butter. The locker room also included several tables used for taping up injured players and back-to-back whiteboards meant for drawing up plays and adjusting game strategies. On January 7, the boards included a few notes on the 2012 Scouting Combine. 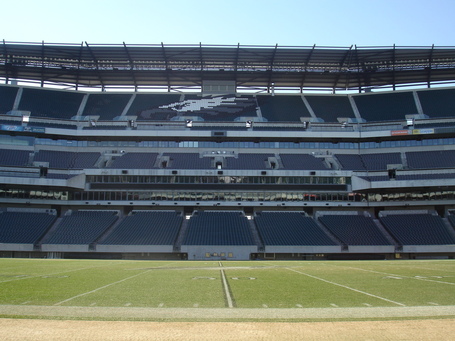 The grandest of them all, perhaps? There's nothing special about the Eagles' grass field, which sports Philadelphia's logos and features at least eight meaningful games per season, but there are plenty of interesting facts pertaining to the field itself. Feast on this stat, which probably isn't as comforting to the man or men responsible for taking care of it: The grass on the Linc's field is mowed three to five times per week, while the ground is also dug up and re-seeded five to seven times throughout the season. There is also an array of pipes that runs underneath the grass to maintain a reasonable temperature on the field, even when snowy weather seems to freeze the surface. For those unaware, the benches on the field for both teams, the Eagles and their opponents, are also housed just inside the stadium's tunnels when the season is not in underway.