Nike NFL Jerseys: Philadelpha Eagles' Unveiled Along With Other Teams

The NFL released its new Nike jerseys on Tuesday, but the Philadelphia Eagles' uniforms remain unchanged.

Share All sharing options for: Nike NFL Jerseys: Philadelpha Eagles' Unveiled Along With Other Teams

The Philadelphia Eagles' new jerseys were released on Tuesday as the NFL unveiled its new line of Nike NFL jerseys, but don't expect a dramatically new look.

In fact, the only difference between last year's Eagles uniform and this year's is that the Eagles jerseys now have Nike signs rather than Reebok signs.

If you were unaware, the NFL ended their 10-year relationship with Reebok as the on-field provider last season after inking a deal with Nike in 2010. And for the past year, fans have been anticipating what the new uniforms of their franchises may look like. The Nike and NFL deal was reported to be worth $35 million per year. 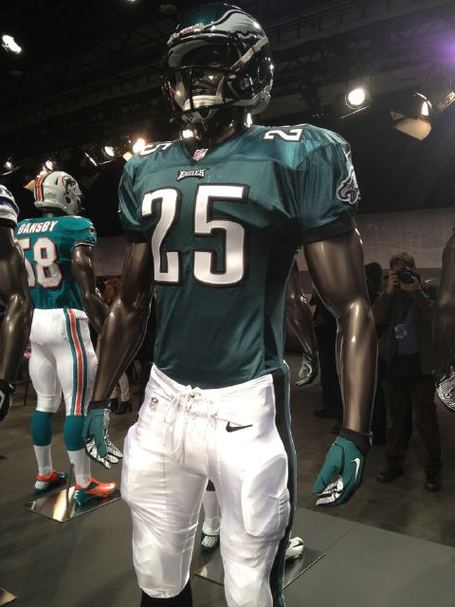 To discuss the Eagles new Nike uniforms, visit SB Nation's Bleeding Green Nation. Meanwhile, for a complete rundown of all the uniforms, check out the SB Nation StoryStream.