Less than two minutes after James van Riemsdyk's tying goal, the Flyers had their fourth line on the ice and got beat.

Last night, the Flyers took on a bad Hurricanes team without two sure-fire first ballot Hall of Famers. It was a game they still could have easily won, especially considering the fact that the Flyers played pretty well. Sure, there were mistakes and some questionable goaltending, but in all, it was a good effort from the Flyers.

While Ilya Bryzgalov didn't have his best game, the Flyers were within one goal early in the second, thanks to James van Riemsdyk's great effort. After a forty-five second shift from the Hartnell - Talbot - Simmonds line, the Flyers dispatched their fourth line of Sean Couturier, Jody Shelley, and Zac Rinaldo for a neutral zone faceoff. Not long after, the Flyers iced the puck.

That allowed Paul Maurice to put Tim Brent, Chad LaRose, and Alexie Ponikarovsky out on the ice against the Flyers' fourth line and third defense pair (Kevin Marshall snuck onto the ice for Marc-Andre Bourdon during the icing). It would become the turning point of the game.

According to the official score sheet, Tim Brent would win the faceoff, Kevin Marshall would block a Tomas Kaberle wrist shot, and then Brent would fire the puck wide. That's where we pick up the video.

Zac Rinaldo has the puck in the corner, but he's about to be hit. So he fires it around behind the net. 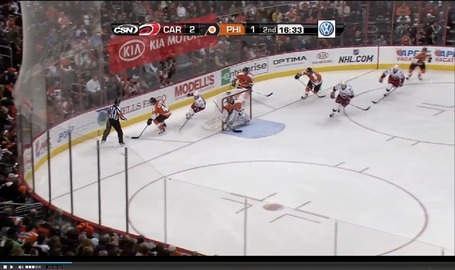 Kevin Marshall picks up the puck, but he is on his backhand and has the ref standing right in front of him. No excuse, he has to get that puck hard up the boards. He doesn't. 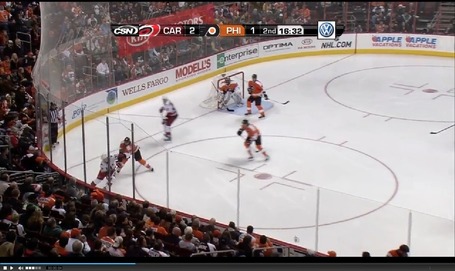 Brent picks the puck up, Ponikarovsky goes to the corner to start the cycle, soon followed by Jody Shelley, while Lilja stands in front of the net. Right now, the Flyers are defending well, with only Shelley about a step behind. 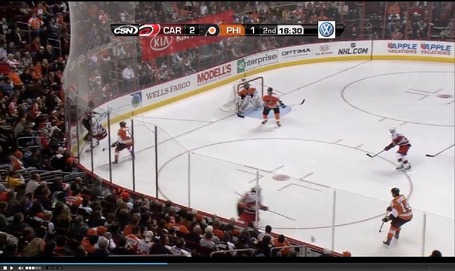 Marshall follows his man up the boards, Shelley is going in for the hit, Couturier rotated up to cover Shelley's position at the point, and Lilja is taking a step towards the man Rinaldo (off screen) isn't covering.

LaRose looks dangerous at the moment, but there's little chance that Ponikarovsky can get him the puck. But LaRose is your eventual goal scorer, and he's already floating free in the offensive zone. 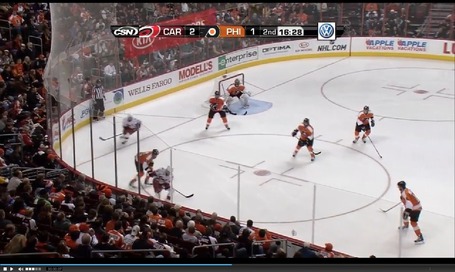 Ponikarovsky bounces off the check of Shelley (watch it on video. It's pretty sad), LaRose is in position to pick up the cycle, Lilja is still in front of the net, three Hurricanes are off screen, and all five Flyers are watching the puck. It is this image that spells impending doom. 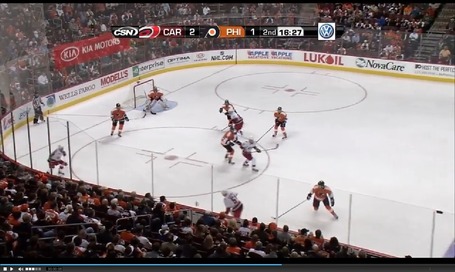 The puck gets passed back to the point, but Couturier had no idea his man was pinching. That happens. So he's two steps behind, Shelley is still marking Ponikarovsky, LaRose is still floating free, Rinaldo is still guarding nobody, and there's still a Hurricane off-screen.

Credit must be given to Ponikarovsky and Kaberle here. Ponikarovsky could have just cycled back to LaRose, but he and Kaberle caught Couturier off guard - the best defender on the ice - and opened up a lot of space. 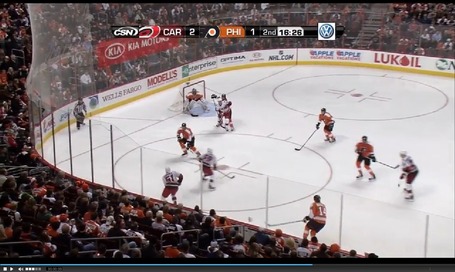 LaRose moves to the faceoff dot (i.e. the Stamkos spot) and sets up shop. Rinaldo has moved maybe 4 feet since the turnover, covering nobody. Marshall is tying up his man in front of the net, Shelley is guarding his man at the point, and Lilja is preventing Kaberle from driving to the net. 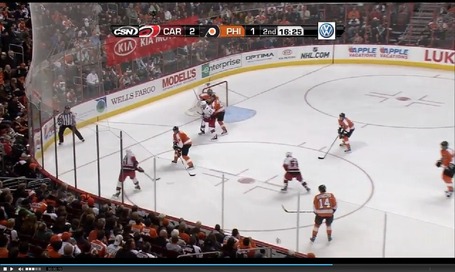 Less than a minute after cutting a two-goal deficit to one, the Flyers put out their fourth line. Within another minute, they were down two goals again.

When you have three rookies on the ice and you support them with Jody Shelley and Andreas Lilja, bad things will happen. The Hurricanes successfully forced a turnover, completed a cycle, and created holes in the Flyers defense. Then Chad LaRose buried the puck past Bryzgalov.

The Energy Line provided Carolina with their turning point.