After sources confirmed a jersey to Philly Sports Daily in October, it became less likely with each day that it was actually the jersey the Flyers would wear on the Citizens Bank Park infield January 2nd. So we waited for another possible leak.

Today, The Orange Update posted an image - since removed - of the Winter Classic jersey, saying:

"This design, confirmed by people involved with the design and production of the jerseys, has been recognized as the 'closest they've seen' to 'the actual thing.'"

Luckily, Puck Daddy wrote about it before the story was removed - the catalyst for it being removed? - which captured the image and some of the language. 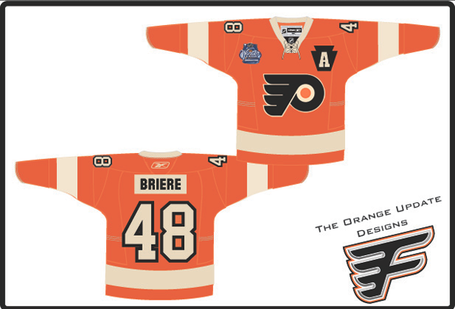 Later today, icethetics posted their theory on what the jersey would be by simply saying, "Again, understand these are based on what I believe to be true. Feel free to tell me how wrong I am."

With only small differences, the two jerseys look largely the same. Is it possible that these are actually, at least, very close to the jerseys the Flyers will wear

The icethetics mockups have the added element of realism, but that may just be superior artwork always found on their site. In any event, the keystone under captain patches is a fantastic addition.

Other than that, these are simply the Flyers current home threads with alternate black/white numbers and letters as well as off-white instead of white. Is that enough to get you to buy one, if real?

UPDATE: As Crossing Broad pointed out on twitter, Frank Seravalli of the Daily News has already gotten a Flyers executive to deny The Orange Update's claim. While nothing above contradicts this information, it is worth clarifying.