HBO once again chronicles the buildup to the Winter Classic in this fantastic four-part, behind-the-scenes look at the NHL teams.

HBO is once again chronicling the buildup to the NHL's Winter Classic, and like last year's rousing success, it once again provides a fantastic look at life for those in the NHL.

There are plenty of other recaps up from the season's first episode - Travis Hughes did a great job over at SBNation.com, as did Greg Wyshynski at Puck Daddy - but  the most interesting thing of the show to me were the little things.

Warning: In case it wasn't evident, there will be spoilers. And cursing.

Right in the beginning, we see that the Rangers players commute to Madison Square Garden like any other New Yorker. Watching Rangers players take a cab, the subway, or the sidewalk to work is just one part of those little things we enjoy so much about the series.

Once inside the locker room, the short clips of Henrik Lundqvist juggling three rolls of tape and Sean Avery juggling a tennis ball on his stick at his locker is an introduction to the pre-game routines of players. Marian Gaborik sits quietly, hunched over with his head down, gathering his thoughts. Everyone prepares differently, and this is a look at that.

At intermission of the first game, we see John Tortorella verbalize his hatred for the 24/7 cameras previously expressed:

Brian Boyle, we've done that fucking coverage all fucking year long. You got that fucking mic on, you can't fucking think straight.

Not to disagree with the coach, but I'm not sure if the cause and effect there are exactly related.

Switching to the Flyers, Ilya Bryzgalov was the focal point after a quick introduction to the team. He soon started talking about how big the universe is.

After a quick chat with Chris Pronger, we are shown the Rangers taking a group of underprivileged New York kids to Radio City Music Hall in a Hummer Limo. Contrast this and Wayne Simmonds' segment on spending his off day at a Ed Snider Youth Hockey Foundation event later in the episode, with Sean Avery's segment on him modeling on his off day.

Most people don't like Sean Avery, and while he has a good story - being sent to the AHL and coming back - he doesn't do much to make himself more likeable here. Sure, he doesn't come off negatively, but he definitely doesn't come across as someone who can relate to most hockey fans.

HBO then shows Michael Del Zotto walking into the training room after taking a rough fall into the end boards the night before. His teammates aren't sympathetic as one asks "What are [the cameras] following you around for?" and Dan Girardi mockingly says "I need to exchange my band-aid here" while pointing to a small cut closed with a few stitches. One has to imagine that the ribbing gets much worse for minor bumps and bruises.

Watching Maxime Talbot meet up with former head coach Dan Bylsma before the Flyers - Penguins game was a nice little look at two of last year's stars, especially Bylsma remarking to Talbot, "goal-scorer now, huh? I like it" immediately after exchanging pleasantries.

Using the Penguins game as a transition, HBO cameras then showed another detail of NHL life: Jaromir Jagr preparing his equipment. He sands down the blade of his sticks, cuts off the top of the shaft using both a hand-saw and a power-saw. In the age of sponsorships and free sticks, the maintenance that goes into one's sticks goes far beyond just taping them up.

Perhaps the only negative I can find about Peter Laviolette from this episode is when he called the Penguins game "a must-win". After having won three in a row at that point, and five of their last six, it seems hyperbolic to say an early December game must be won. Other than that, Laviolette really came off well this episode.

In the middle of the game, Max Talbot is seen using what appears to be smelling salts on the bench. I wonder if this was to clear up his sinuses? Again, the little things. Like Peter Laviolette yelling "Relo! Relo!" from the bench. What does that even mean?

Upon returning to the locker room, we see the Flyers victory song.

Not only does Kevin Marshall have some great moves on skates, the song reminds us that this Flyers team is filled with thirteen players aged 25 or younger. "Crazy ass kids" indeed.

Back to the Rangers, we see Artem Anisimov and his goal celebration which sparked a brawl on the ice. HBO shows the chain of events, from Brandon Dubinsky arguing that Vinny Lecavalier started the whole thing but didn't get a penalty to Anisimov not being told what he did, to John Tortorella being told by the ref that Anisimov's celebration was "not kosher."

But watching the players file back into the locker room to see Anisimov sitting there was fantastic. Avery smiles, the next man in smiles, another player immediately asks what he was doing, and Tortorella says they shot themselves in the foot "with their own stupidity."

In the third period, the Lightning tie the game with under two minutes left by scoring short-handed. The cameras don't even show the goal, but just Tortorella's reaction. Great television.

Anisimov's post-game apology, the room telling him it was okay, and later his explanation of how he saw someone in Russia do that after every goal, was telling. In Russia, the rifle shot was non-offensive entertainment for the fans. In the NHL, it was a provocative act that cost the Rangers.

Peter Laviolette then told the cameras something that could easily be seen as insight into the Flyers off-season moves:

One of the biggest complaints from fans about Mike Richards and Jeff Carter was their calm demeanor, often seen as lazy and disinterested, both on and off the ice. This was also a character trait possessed by former head coach John Stevens. All three are gone. Obviously, this is hardly the only reason Paul Holmgren traded his captain and leading goal scorer, but it's not hard to see personality differences between coach and stars from that clip right there.

Upon returning to the Rangers, we get a segment on Ryan Callahan and his blue-collar background from Rochester, New York. The pride his dad had when talking about Callahan being the captain of the Rangers was moving, as was the post-game meeting between Callahan and his grandmother.

Kudos to the Callahan's for one of the best segment's of the hour.

In what was surely a tough part of the episode for Flyers fans, the Claude Giroux injury was shown. As something that happened so recently, this part was especially fascinating.

In the hallway after the game, James van Riemsdyk comes out and asks Giroux, "You okay, kid?" First, van Riemsdyk is younger than Giroux. Second, Giroux had a delayed reaction to answering him. Yes, someone was talking to Giroux at the time, but Giroux looks away from that person, looks at JVR after the question, looks back at the original conversation, and then looks back to where JVR used to be standing. Upon noticing JVR is no longer there, Giroux looks back down the hall and says, "Yeah. Reemer." And nods.

Probably reading too much into this, but the delayed reaction and low-toned response were interesting - and worrisome - still.

In Buffalo, the Rangers played a tight game against the Sabres. Brandon Prust then said something interesting: "He fucking snowed our goalie. How does he not get a fucking penalty? Alright, I'll snow their fucking goalie now."

I'm not sure if Prust is aware, but snowing a goalie is not a penalty. Disrespectful? Maybe, but isn't that a fairly common thing?

Back in Philadelphia, while Giroux is laying on the trainer's table the next day, Peter Laviolette asks him how he's doing. Giroux gives a thumbs up.

Laviolette asks "Feeling a little better?" Giroux looks up momentarily, doesn't answer, then puts his face back in the table.

Laviolette asks "The same?" Giroux lifts his head to talk, but doesn't look up and says "Pretty much the same."

Laviolette walks away with a worried look on his face, off to talk to the trainer.

Then Ilya Bryzgalov tells us that China kills people who kill tigers. He really is entertaining:

At the holiday party, Max Talbot is shown in another awesomely bad holiday sweater. Related, Talbot continues to be awesome. 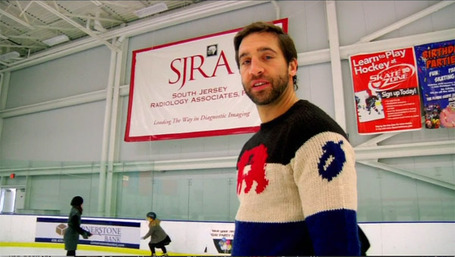 After some quick looks at Claude Giroux's concussion testing - which revealed he has a concussion - the episode ends with the Flyers talking about his injury on the train to Washington, where the next episode will pick up.

For the first episode, HBO showed why they are the best at sports documentaries. Going forward, I hope there is more fun shown and less serious segments. That's kind of difficult with Giroux's concussion and the introductory nature of the first episode, but the players seemed a little reserved this week.

But really, all that needs to be said about this episode is that it is still a must-watch show for hockey fans.