On Monday, the ice trucks that will help Citizens Bank Park transform from a baseball stadium into an ice rink for the 2012 Winter Classic arrived. That means only one thing, the annual NHL outdoor game, which will be played Monday, Jan. 2, between the Philadelphia Flyers and New York Rangers, is almost here! -- in fact, its just 13 days away!

And, if you'd like an idea of what the stadium is going to look like on that day. Well, you're in luck, as Schuyler Baehman, who's the NHL Senior Manager of Communications, tweeted Monday a rendering of what Citizens Bank Park will look like with a hockey rink in the middle of it. 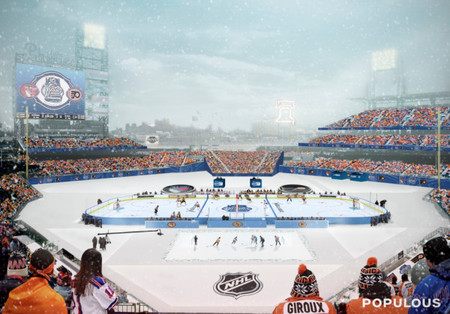 What a great picture! Travis Hughes of the Flyers blog Broad Street Hockey had this to say Monday:

"I think the one thing that's surprising is that mound of temporary bleachers in center field," said Hughes. "(Unless you have tickets there.) Then, I guess they're not that surprising at all.) Those will block off the ivy and the bullpen and create a lot more seats for the game, but it looks like they shield some of the outfield seats from a full view of the ice. They certainly take away some killer standing room views out on Ashburn Alley."

For more on the Winter Classic, check out SB Nation Philly's StoryStream. For more on the Flyers, visit our team page or our blog, Broad Street Hockey.