The Flyers decided to save us the suspense of a final game of the season shootout this season and just clinched their playoff spot tonight instead with a 3-2 win over the Dallas Stars. Ville Leino's shootout goal ensured the Flyers their 15th playoff appearance in the last 16 years. It also moved the Flyers two points ahead of the idle Washington Capitals, who they will face in DC on Tuesday.

Sergei Bobrovsky made 27 saves in the win, including one mindblowing full split stop to rob Alex Goligoski in overtime. This picture doesn't do it justice, but it does give you some idea of how athletic this save was. 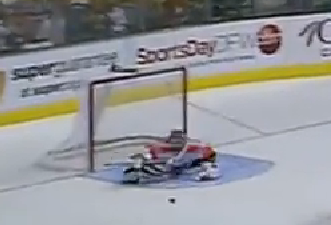 Jeff Carter and Mike Richards each scored a goal in regulation as the Flyers won for the fourth time in their last six games. In fact, the Flyers have gotten at least a point in every game since that March 6th 7-0 drubbing at the hands of the Rangers.

Oh and at least one Dallas Stars was pretty broken up over the Flyers win. No word on whether this woman is related Kari Lehtonen or something, since the goalie is now winless in 12 career games against the Flyers. 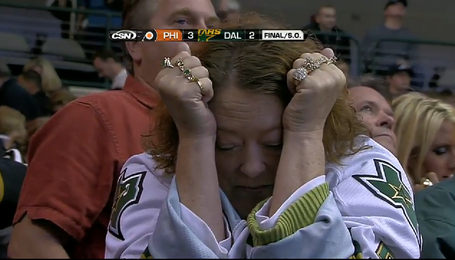