Even During a Scoring Drought, Matt Read Is a Great Story

Matt Read's February scoring drought was fit into an easy narrative about hitting the rookie wall. But as with everything Matt Read, the details make the story great.

Share All sharing options for: Even During a Scoring Drought, Matt Read Is a Great Story

Matt Read has garnered a lot of attention this year. For as much as I dislike (despise?) narratives, it's hard to dislike Read's story.

Frank Seravalli gave a thorough run-down of Read's story when he was invited to the All-Star Game, but in short, you have a kid from a small town in Canada going to a small school in the States. He Captains an underdog team to the NCAA Tournament, stays all four years without ever being drafted, despite NHL offers after his third year, signs with the forward-heavy Flyers yet winds up as a rookie invitee to the All-Star Game.

Sometimes, you just have to appreciate a good story. Matt Read is a great story.

Which is why attempting to classify his February (one goal and three assists) as him "hitting the rookie wall" is doing a disservice to that story. Many have written that Read hit the wall, including SB Nation Philly's own Associate Editor David Strehle.

But as I wrote just this week, proclaiming Read hit the rookie wall is only looking at the surface.

Maybe the rookie wall does exist. It's certainly logical to assume that going from playing roughly forty college games a year to playing 82 NHL games is a big step that takes a lot out of players, both physically and mentally.

But it's also pretty simple to see that there are other things at play, such as Read's variable shooting percentage and his odds-defying start to his career. Rather than attempt to say that he wasn't as good as everyone thought he was through 43 games, nor not nearly as bad as he has been the past 15 games, but instead that Read was the victim of fatigue, opportunity, situation, luck, and a variety of other factors, it's much easier to say - and agree with - Read "hit the rookie wall".

Simply put, Read once again makes for a good story. But just like his career path summary I offered up top, a more thorough look - like Seravalli's linked article - would reveal that the story of his February can't just be summarized by him "hitting the rookie wall". There are too many details you miss by stopping the story at that point.

It's quite easy to see that as a slump, and since he's a rookie, it's easy to write that he "hit the rookie wall".

As an aside: From January 19th through February 28th, fellow rookie Sean Couturier scored zero goals and four points.

Simply going through a point scoring slump doesn't mean a player has become ineffective. It could just mean the player's luck has changed. Sean Couturier's similarly timed scoring slump is further evidence of this.

To help illustrate this point we'll look at a new Behind the Net feature that shows a graph of every player's offensive zone starts, Fenwick ratio, and goal ratio during a set time frame. Here is Matt Read's since he had a goal and an assist in Ottawa on January 8th. 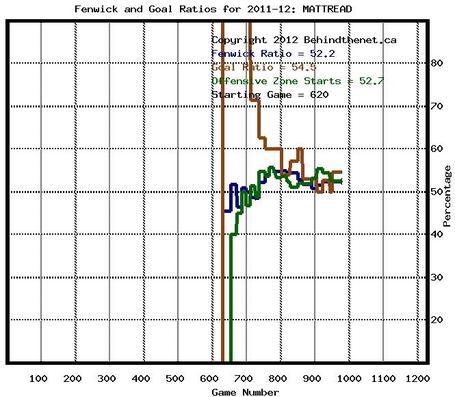 During the 22 game stretch where Read scored 3 goals and 7 assists, the Flyers received 54.5% of all goals at even strength with Read on the ice and 52.2% of all Fenwick events. This is in line with his zone starts, as well.

Neither of those numbers look like a player going through a slump.

If we include Vic Ferrari's Time on Ice tool in our look, we can see that the Flyers were still controlling play with Read on the ice, thought they were slightly worse with Read than during all periods.

Simply put, using goal ratio and approximations for attack time, it would be difficult to come to the conclusion that Read was struggling at all.

But what if we limit our look only to the last 3 games in January - the first three games Read failed to score a goal - and go from there? We'll have a 20 game sample where Read scored 4 goals and 4 assists (3 goals and 1 assist have all come in March). 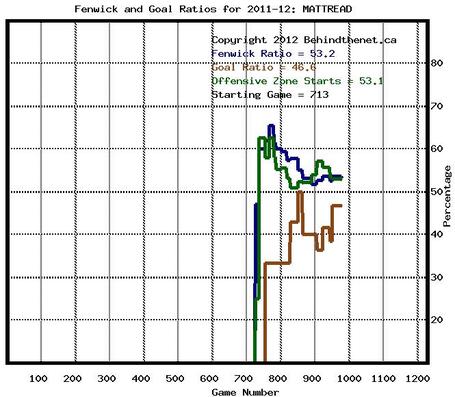 We see a much different picture. Read was still getting offensive zone starts and the Flyers were still winning the puck possession battle, but they weren't scoring. This looks like a player who is playing well, but not getting the breaks.

Indeed, using Vic Ferrari's script again, we see that's exactly what was going on. Limiting our look only to Read's scoring slump - the 16 games where he scored but 1 goal and 3 assists - we see Flyers goalies stopped only 87.5% of all shots at even strength, the lowest of any Flyer forward to play at least 5 games. That's an unsustainably low save percentage and suggested that the Flyers wouldn't continue getting only 33 percent of the goals scored with Read on the ice.

On offense, Read saw a similar situation. The Flyers only scored on 6.6% of their shots with Read on the ice, a full percent lower than the team's shooting percentage as a whole during the stretch. That may not sound like much, but the 6.6 percent is a full two and a half percent below the team's shooting percentage on the season and four percent below their season percentage with Read on the ice.

Again, this suggests that the Flyers were going to start scoring with Read on the ice purely the result of random variance.

We know shooting percentage is highly variable and that even a 14.5% shooter who takes 3 shots a game will see dramatic peaks and valleys through a season. Matt Read just went through one of those dramatic valleys. After coming down from a dramatic peak earlier in the season.

Is Matt Read tired as a result of the longer professional season? Maybe. He say's he's not. Maybe he just went through a slump, like Danny Briere - decidedly not a rookie - is currently going through.

But as Jaromir Jagr said at the bottom of John Smallwood's article linked above, "It doesn't matter if your name is Matt Read or Mario Lemieux. Sometimes in this game, whatever you touch goes in. Sometimes, everything you touch, you miss the net, the goalie makes a great save or you hit the post. That's the way it is."

Trying to fit that phenomenon into a neat little story as simple as "the rookie wall" just doesn't get the whole story.

And with Matt Read, the full story is the best part.