When faced with a complex problem, many people resort to simplified solutions that mask the real rationale. When Ilya Bryzgalov struggled in 2011, many were quick to blame mental and external factors, rather than examine on-ice actions and historical trends. They are now two months behind explaining his turnaround.

It's that time of year again. It happens every spring. The players who got everyone all emotional in December and January due to their unsustainable performances in small sample sizes are starting to regress, leaving people with a need to come up with an explanation for what elicited such an emotional reaction in the first place.

For example: Matt Read only scored once in 15 games after scoring 15 times in 43 games. This must mean that he has hit the "Rookie wall".

Never mind the fact that he was one of only three people since 1994 to score 0.3 goals per game as a 24 year old rookie at that point. Never mind the fact that Read had a fairly robust 15% shooting percentage through 43 games and shot a miserable 3.6% in the 15 game sample being used as proof of his "hitting the wall". Also ignore that he scored two goals the game after the story published.

As humans, we look for simple solutions to complex problems. Rather than examine how (fantastically) unlikely Read's first half was or how (terribly) unlikely his most recent 15 games were, the easier solution is that "he's tired because he's a rookie."

Maybe he is. Maybe the rookie wall does exist. It's certainly logical to assume that going from playing roughly forty college games a year to playing 82 NHL games is a big step that takes a lot out of players, both physically and mentally.

But it's also pretty simple to see that there are other things at play, such as Read's variable shooting percentage and his odds-defying start to his career. Rather than attempt to say that he wasn't as good as everyone thought he was through 43 games, nor not nearly as bad as he has been the past 15 games, but instead that Read was the victim of fatigue, opportunity, situation, luck, and a variety of other factors, it's much easier to say - and agree with - Read "hit the rookie wall".

Which gets us to the real example of people looking for the simple narrative rather than the more difficult truth: Ilya Bryzgalov's turnaround.

Through December 28th, Bryzgalov had an abysmal 0.888 save percentage. Everywhere you looked, there were "experts" saying Bryzgalov was struggling because he "got caught up in his own popularity", or because he wasn't getting consecutive starts, or HBO distracted him from playing hockey, or he was not comfortable in Philadelphia, or he lacked "mental toughness", or that the media was too tough...he wasn't confident...and he was a bad teammate, and plenty of other things.

Rather than explain how all those cliché answers that put a neat little bow on terribly complicated problems actually manifest themselves in pucks ending up in the Flyers net, most people just nod and agree. At least NHL.com was able to watch Bryzgalov and conclude that he was "[n]ot tracking the puck", giving up "[t]oo many rebounds" and "[p]laying too deep" in his net.

There were concrete examples of what Bryzgalov was doing wrong and how it was resulting in goals against. Not many people took the time to do that.

Even if we ignore the laziness with which many thought the physical problem of giving up goals was solely explainable with mental deficiencies, there's still the problem of regression. All one had to do was look at history to see that Ilya Bryzgalov was not going to continue stopping fewer than 89% of shots.

It just so happens that I did exactly that.

It is very easy to over-emphasize the short-term results, making them seem bigger than they are. Bryzgalov really is playing poorly, but the long-term trend is clear: Bryzgalov is in line with the NHL's best goalies. We can look for reasons why he's struggling - the expectations of the contract, the pressure of the media, the new teammates, the new city, the new defensive system, the injuries, his confidence - but those are just excuses to fill a narrative.

It is far too early to think this is anything more than an outlier for Bryzgalov. Be concerned, yes. But don't expect this to continue, either.

So if we were to update the chart of Bryzgalov's ten-game rolling average save percentage from before, what would it look like? 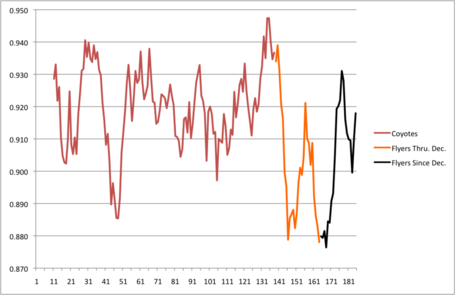 Almost immediately after publishing, Bryzgalov regressed to above his career norm. He hasn't maintained his performance at his level from the last two years, but he's close. Last night's game against Detroit went a long way to helping that.

It's certainly conceivable, perhaps even likely, that these things have positively impacted Bryzgalov's performance, contributing to the turnaround.

I expect more stories to come out soon - especially today - that attempt to explain Bryzgalov's recent stretch of good play as a mental correction. When reading those stories, ask yourself what those same people were saying when Bryzgalov was playing poorly.

Did those people take the time to look and see what Bryzgalov was doing wrong on the ice? Did they look at his past and see that it was not unusual for him to struggle over large stretches? Did they predict regression and caution against over-reacting? Did they explain how the media was to blame for him playing poorly? Or better yet: did they blame the added media scrutiny for Bryzgalov's poor play and then turn around and scrutinize further?

It is much easier to say "Bryzgalov is confident" than it is to try and understand how the mental side of the game contributes to goalies stopping pucks. Even that's easier than trying to explain a variation from the norm that will regress to average.