VIDEO: The Real Hulk Hogan Appears, Roots For The Flyers

Share All sharing options for: VIDEO: The Real Hulk Hogan Appears, Roots For The Flyers

During an eventful game (on the scoreboard and in the penalty box) between the Flyers and the Penguins in Game Three of the Eastern Conference Quarterfinal on Sunday, a special video made an appearance during the third period: one featuring wrestler Hulk Hogan (the real one, unlike that Pittsburgh fan who dressed up as Hogan). The Hulkster was cheering on the Flyers, as you would expect at Wells Fargo Center.

Here's a still image of Hulk Hogan ripping his shirt from the video: 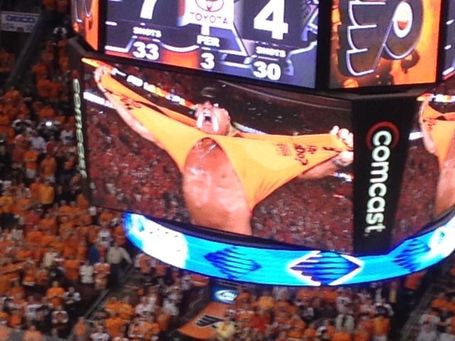 And finally, here's the video message itself from Hogan (via Flyers).

The Flyers went on to win score another goal after the video played in a game they totally dominated, 8-4. There were 133 combined penalty minutes in the contest. The Flyers will take a 3-0 series lead and any remaining Hulkamania and Flyersmania momentum into Game Four.

Could Postseason Draws End Up Falling Favorably For Flyers?