So much for the Philadelphia Flyers closing out their series with the Pittsburgh Penguins on Wednesday night. The Penguins scored five goals in the second period to jump out to a 9-3 lead. The Flyers still have 20 minutes to catch up, but that will require tightening things on defense and in net, which seems like an impossible task at this point.

Philadelphia failed to score at all in the second period, but it would have been hard to find the time with Ottawa keeping their side of the ice occupied.

Flyers fans could do nothing but smile. 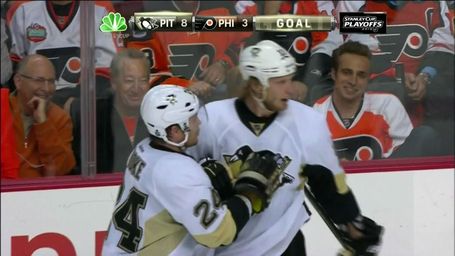 For more on the Flyers, please be sure to check out our blog Broad Street Hockey and SB Nation Philly for all the latest news and updates.

Could Postseason Draws End Up Falling Favorably For Flyers?