Breaking Down the San Francisco Giants

The Phillies pitchers have a slight edge in every game but Blanton vs. Bumgarner in game four.

Share All sharing options for: Breaking Down the San Francisco Giants

Last week we dissected the Reds, and that worked out okay. Since I'm not one to mess with karma (I will be having a cheesesteak before each game just like I did in the NLDS, even though I'm on the west coast), I've decided to do the same thing for the Giants. Dig in.

The Good Phight has the probables again:

Roy Halladay-Tim Lincecum is the best pitching matchup of the postseason, and maybe the best since Randy Johnson and Greg Maddux in 2001, although CC Sabathia and Cliff Lee from last year may have a claim in there. Lincecum's fastball/changeup/slider combination is one of the more unfair things we have in this world - up there with the likes of bars closing too early and fascism. Considering both teams have been light with the lumber lately, both guys should come out dealing in game one. Defense will be crucial to who comes out on top.

Bruce Bochy made an interesting call going with Jonathan Sanchez on the road in game two and pushing Matt Cain to game three. He claimed he wanted to split up his lefties, but I don't really see the point in doing that. It's more likely the fact that Matt Cain is a fly ball pitcher who performs much better at home. Cain has a 46.6% fly ball rate compared to Sanchez's 43.7%. None of the Phillies starters (including Joe Blanton) have a FB% over 40. Cain's home-road splits also significantly lean towards playing at home. Sanchez actually performs better on the road. Why Bochy wanted to say it was about splitting up the righties is beyond me.

The best bet in getting to Lincecum and Sanchez is making them throw pitches. Both are strikeout pitchers, but dish out a good amount of walks too, Sanchez being the league leader in free passes. Patience will be huge for the hitters and getting those two Giants starters out of the game as quickly as possible would do wonders for helping the Phillies advance to the Series. Matt Cain throws strikes. He keeps pitches in the zone, but they have enough late life to them that hitters can't get good wood on it. When hitters swung this year, they made contact on 82% of his pitches, 89% when the pitches were strikes (Fangraphs is awesome). Try to jump on an early fastball and get runners on base for RBI chances.

For some reason, Madison Bumgarner scares me the most. He's two months younger than me and hasn't pitched against a team over .500 since the eleventh of September, but his stuff is nasty and he's a lefty that the Phils have never seen. Color me frightened if the pressure of playoff pitching doesn't get to the kid.

Brian Wilson is good. He's also someone we'd probably love if he was in Philly. Sergio Romo and Santiago Casilla are two right-handed tossing, strange-looking, inning-closing right-handers that have had good years. Casilla does a great job at keeping the ball on the ground, with a curveball and slider that go down and away from right-handed hitters. He is very walk prone against lefties though, allowing 14 in 16.1 innings. Romo is also much better facing righties, but he's only average away from home. If the Phillies power lefties get up against these two at Citizens Bank, Watch Out Bro.

Jeremy Affeldt and Javier Lopez serve as the lefty specialists and will be seeing a lot of Howard, Utley, and Ibanez over the next week. Bummer: They're currently 0-10 off Lopez. Chase owns Affeldt though. Expect to see curveballs in the dirt from Affeldt and sliders that tail wide from Lopez. No other reliever took the mound in their series over the Braves. At AT&T Park, these relievers are crazy difficult, but at CBP, we should be able to get to them.

The Puerto Rican switch-hitter had a very nice season, his first starting full time. In limited at-bats, Torres had seven home runs coming into the season. After 139 games batting mostly leadoff, Torres went yard sixteen times, good for a .211 ISO, helped in part by a .331 BABIP. He mashes fastballs but has a really tough time with off-speed pitches. Keep him guessing and he won't hurt us with line drives.

I'm pumped for Freddy to be in the playoffs because I've always liked him. That being said, I don't think he'll pose a huge problems for Phillies pitchers. Limited speed, limited power (.104 ISO), and his .680 road OPS looks really ugly in the 2-hole. He doesn't strike out much, but he'll roll over sliders and open up some double play opportunities. He's a contact hitter that really needs balls to fall in for him to be a factor.

Huff's been a guy that's always put up meaningless numbers. Mediocre in his first playoff series, Huff's got sub-par numbers against the Phillies four. There's no particular pitch that gives him a lot of trouble and he's very selective at the plate, swinging at under 60% of strikes and 29% out of the zone. Keeping the ball around the plate could result in a few backwards K's. For a three-hitter in the LCS, though, he's not terribly dangerous.

Scouts and San Francisco fans alike have been dripping in adoration for the young catcher. I personally like him better than Orioles golden boy Matt Wieters and think he'll turn himself into a top 5 catcher for years. But he has a really tough time with off-speed pitches that stay in the zone. Cole's change, Halladay's anything, and Oswalt's curve should be hard to handle for Posey. He's got a really good eye at the plate. Throwing strikes to him (and the other patient guys in the middle of the order) will be crucial in getting through the meat.

Fortunately for us, Pat will be spending most of the game in section 104, pleasing all the ladies in row 8 with his washboard abs and award-winning jaw line. Pat has single-handedly broken up three of my relationships, two friendships, and gotten me fired from a job. God bless him. 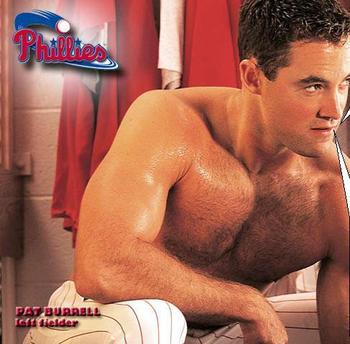 I'm having a tough time wrapping my mind around his continued existence, much less his starting spot on an LCS team. He was good back when MLB Showdown was cool, but since then his only production comes from the occasional homer that keeps his WPA away from the red. Not worried.

The Jeff Francouer of pandas, Pablo has been relegated to platoon duty with ex-Cubs lackey Mike Fontenot because his wild swings have failed to connect more often than not recently. His OPS off LHP is a miserable .589 and his ISO has dropped almost a full point from last season to .140. This comes from a return to earth by his BABIP, which previously stood at an unsustainable .353. He doesn't walk enough and unless he's rediscovered his stroke, he's not worth sweating.

My God. The infuriating Cody Ross has swapped teams and while I'm ecstatic to have his face out of my division, being on the Phillies LCS opponent worries me. Why? He has 13 career home runs against the Phillies, including 5 last year alone to go along with his triple slash of .349/.359/.635. Hide your women and find your alcohol when Cody comes up, especially in the late innings. This sonovabitch finds a way to get it done against us when it counts the most.

Strangely enough, it seems that Joe Blanton has the best numbers against the Giants hitters, though most lines are brush-off-able due to sample size. This lineup doesn't compare to the Reds. I don't expect our pitchers will dominate as much, but there's a few quality starts to be had here.

Aaron Rowand, Mike Fontenot, and Travis Ishikawa lead a very formidable bench for the Giants. None of them have much pop left in their bats, but Ishikawa does not strike out and Rowand, though injured, can still run a bit. Edgar Rentaria lost his spot to Uribe when he went down in May. Nate Schierholtz is a serviceable defender and Eli Whiteside is a below average backup to Posey. A veteran, capable bench, but without power or speed, there's not much to lose sleep over here.

As a baseball junkie, I'm beyond amped to see the Phillies top three take on the Giants top three. They'll go pitch for pitch, but in the end, I don't think the Philly bats will remain silent much longer. Even against one of the top staffs in the league, they'll wake up sooner or later. Once they do, this series is over. The Giants team is not one to sleep on, but the Phillies are clearly the better team. Phillies in 6.

The last stop before the World Series starts in a few hours.