The Bar Has Been Set; Phillies Win NLDS Game One on Halladay No-No

Share All sharing options for: The Bar Has Been Set; Phillies Win NLDS Game One on Halladay No-No

It took Harry Leroy Halladay just 104 pitches to throw baseball’s second postseason no hitter in its storied history. Nolan Ryan is the last pitcher (or person, for that matter) to throw two no-hitters in the same season. Each batter, pitch, and movement will be analyzed and fawned over by Philadelphia fans for the rest of eternity.

If you ask Roy, credit should go to Carlos Ruiz for calling a hell of a game and that’s exactly what he did. If we’re talking offense and defense, Chooch is one of baseball’s top three catchers. And we bat him seventh.

Offensively, the Phillies got to Edinson Volquez early, running him after just 1.2 innings. They totaled four runs on RBI’s by Chase Utley, Roy Halladay (who?), and Shane Victorino. And then they stopped playing because Halladay was throwing a no-hitter and they wanted to watch. I’m a bit concerned by how ineffective their bullpen rendered our hitters today, but I’m dripping with unbridled joy and sweat from the no-hitter that was. A Jay Bruce full-count walk is the only thing that separated Halladay from perfection.

We’ve got a day to celebrate this and Dusty’s got a day to try to scrape a team together before Roy Oswalt goes Roy Sandwich on everybody’s ass.

Phillies win 4-0, take a one game to none series lead. Take that, Cliff Lee. 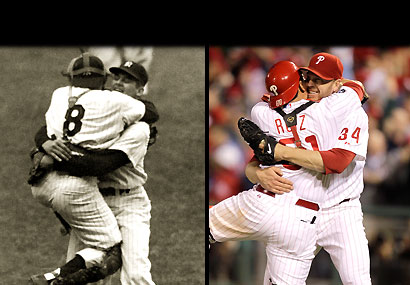