Newspaper Writer Gets On High Horse, Trots Out Bitter Stereotypes

In dismissing a single-sourced rumor, a Delaware County Times writer mixed in some new tricks in the old bag of defending against enemies unseen.

Share All sharing options for: Newspaper Writer Gets On High Horse, Trots Out Bitter Stereotypes

Over at our Flyers blog, Broad Street Hockey, I compile a morning links post that runs every morning. This requires me to use an RSS feed to keep up with the day's stories, from many sources: newspapers, blogs, online newspapers, twitter, and more. One of the sources I consistently read is the Delaware County Times, where Flyers beat writer Anthony SanFilippo does some outstanding work.

Why am I sharing this? Because the delcotimes RSS feeder gives me all their sports headlines, not just Flyers stories and yesterday, I received a story titled "Punch Shots: Faux reporters put the 'twit' in Twitter". Obviously, this grabbed my attention.

I must say, that is excellent headline writing. I rarely, if ever, click on non-Flyers headlines from the delcotimes, and this accomplished exactly what the site wanted: page views. So good job, delcotimes headline writer.

What was in this particular article? Well, the very first sentence reads:

Here’s a stern message to all amateur bloggers and social media page administrators: Shut up.

Off to a strong start! "Hey internet! Stop it. Us professional writers are the only ones who can talk. Thanks - Dying Industry."

Okay, that was a cheap shot, but so was the sentence I'm responding to. Most journalists do great work, which me and my fellow bloggers rely upon to do what we do. But I'm not sitting here yelling at high school sports writers to shut up, even though I want to. I'll mock them instead.

Friday night, my Twitter feed (@DTMattSmith) blew up with a rumor that the Phillies were aggressively pursuing David Wright.

First, way to drop your Twitter handle into your story. Nicely done. Did you get a bump up to your current (as of 1:30 a.m. Tuesday morning) 116 followers after publishing this in the newspaper? 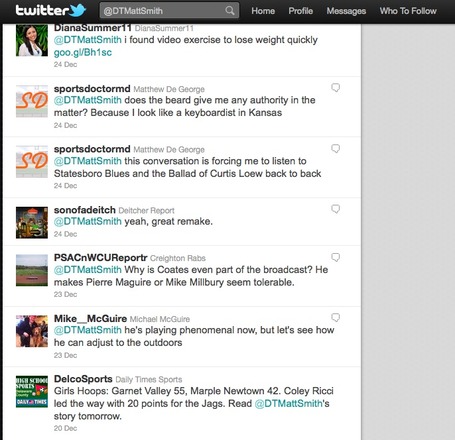 Here are all the tweets mentioning @DTMattSmith from December 20th through Christmas Eve. In case you forgot, Christmas Eve was on Saturday, a day after Mr. Smith's Twitter feed supposedly "blew up".

There isn't a single mention of the David Wright to Phillies rumor in Mr. Smith's timeline. The only thing he could possibly be referring to is all the tweets by people he reads.

The problem is that Mr. Smith follows 113 people. Only one of them - yes, only one - tweeted about it. If Mr. Smith found the conversation about this rumor so overwhelming and so frustrating, it would make more sense to unfollow the one person bringing that conversation to him than to write an editorial in a newspaper about how all bloggers should shut up.

But still, he continues:

The Twitter handle @ThePhillyPhans ignited this erroneous, uh, "report." What, you were expecting a reputable baseball writer?

But what was the offending tweet that Mr. Smith is referring to?

According to a source (this is our story, no actual report) "David Wright may be the 3rd baseman very very shortly."

Right there, in the tweet Mr. Smith sarcastically referred to as a "report", is the phrase "no actual report". Did Mr. Smith read the sentence that he's so upset about, or he is taking a bit of journalistic license here?

Not saying that the Wright story is fact ... but it did come across to us -KK

Trust me here, I was just as surprised by this text as all of you are on the post. Just sit and wait and we will see. I won't believe til

I see as well.I was truly shocked. if I get more I will give it,, however, I am currently at a luncheon -KK

After some time, they took to Facebook to explain themselves in more than 140 characters:

Let me get this through again. We were just passing along information that came our way, believe it or not. Now the source will remain anonymous. Also when I got the message I said really and questioned whether or not to post it. This source has been 100% correct in the past, but never gave information on trades before. Now, I am not backing down from the prior post; however, just like you, I won't believe it until it is official. Oh and btw, threats are not cool. Thanks, Kevin.

Up to this point, ThePhillyPhans have done what both real journalists and bloggers do all the time: report a rumor they have heard, making perfectly clear that it is only a rumor. They have explained themselves repeatedly and stressed that this is simply something they heard.

@ThePhillyPhans might have picked up a few Twitter followers over this incident of amateur journalism gone bad, but real journalism is given a bad name because people can say whatever they want on the Internet.

We can debate the merits of going public with only one source - and personally, one source isn't enough - but when you make clear that you have only the one source and that even you are "surprised" by what the source said, how is that "amateur journalism gone bad"? I don't see anything misleading up to this point.

The real problem, however, is in somehow thinking a relayed rumor on Twitter is what gives real journalism a bad name. Does Mr. Smith really think people can't tell the difference between "ThePhillyPhans" and "The Delaware County Times"? Are we really to believe that people give equal weight to anybody who puts words together to (sometimes) form complete sentences?

What gives bloggers a bad name is when they become so invested in what little information they have that they back themselves into a corner by saying they "will shut down" if their source is wrong, not the fact that they passed on what they've heard.

It is the arrogance that permeates your work, proclaiming that it is not the quality of your work that should determine your reputation but the title others place on you. That is what gives journalism a bad name.

The poor decision to stand behind a single source to the point of threatening to cease operations does not reflect on the nature of blogs or "amateur journalism" any more than Mr. Smith's inflammatory column means that Bob Woodward was a hack.

Newspaper Writer Gets On High Horse, Trots Out Bitter Stereotypes