Good game, let's go pop the champagne! The Phillies routed the St Louis Cardinals tonight 9-2 as they cliched their fifth straight NL East title. It's the Phils 11th overall NL East crown, which ties them with the Braves for the most since the division was formed. The celebrating down at the Bank has just begun as the Phanatic is already parading the 2011 flag on the field.

In addition to obvious reason to celebrate, the Phils also got a standout performance from Roy Oswalt, who threw seven shutout innings, striking out seven and yielding just five hits. As good as Vance Worley has been, Lil' Roy likely just staked his claim to the 4th spot in the rotation come playoff time. Shane Victorino also had a big night with 3 RBI and a couple of hits, including a solo shot to deep center in the 6th. But the one that broke it all open came off the bat of Raul Ibanez in the 8th whose grand slam capped off a six run inning and effectively ended this as a contest.

Hunter Pence also had a big night getting on base four times, but getting the chance to finally be part of a division clinching celebration after so many years of losing in Houston certainly has to overshadow that. 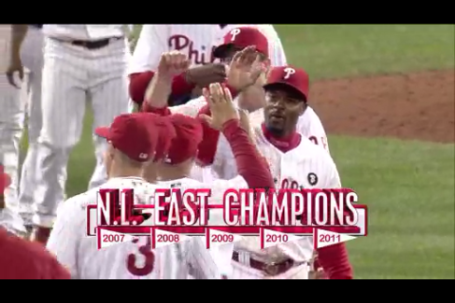 Phillies Lose Series Finale, But Clinch Homefield In The Process