There's no better spectacle in sports than the first two rounds of the NCAA Men's Basketball Tournament. Here's my preview of the madness that is about to consume both the month of March and an entire country.

Ah, yes, it's that time of year again. March Madness is here (and the NHL playoffs are less than a month away), which means my work productivity will decrease by approximately infinity percent.

What I want to do:

Pick three of the four 14 seeds -- St. Bonaventure, Belmont, and South Dakota State -- to win their first round games. I think this is the best crop of 14 seeds in... ever. Conversely, for the first time since I started filling out brackets, I don't have a 12 seed beating a 5 seed. I'm sure I'll regret that in no time.

What I'm too chicken shit to do:

Pick three of the four 14 seeds to win their first round games. I will be picking two, however: St. Bonaventure and Belmont.

Probably not, but don't sleep on UNC-Asheville, especially now that Syracuse will be without Fab Melo due to academic ineligibility. It seems like a perfect storm of sorts, and the Orange are ripe for the taking without the anchor of their 2-3 zone. Meanwhile, UNC-Ashville is the best 16 seed in recent memory -- which is to say they shouldn't have been given a 16 seed; how they aren't at least a 15 seed instead of a team like Norfolk State is beyond me -- and should not be confused with a pissant mid-major that'll serve as a little more than a tune-up game for their first round opponent. With three seniors leading the way, this is a team that went 24-9 overall, including 16-2 in the Big South. It ranked fifth in the nation in points per game (81.2), eighth in assists per game (16.6), 16th in field goal percentage (.484), and has five players who average double-figures -- the top two scorers, guards Matt Dickey and J.P. Primm, shoot .381 and .360 from three-point range, respectively. The Bulldogs also shoot 76.2% from the free throw line (tied for 12th in the nation).

Now, here's the main problem with UNC-Asheville: It's a small team. Like, really small, as in the smallest team in the entire nation, with zero inside presence. Those aforementioned five players who average in double figures? Their heights (and weights), in descending order: 6-1 (180), 6-1 (195), 6-3 (200), 6-4 (210), 6-4 (170). The tallest player on the team who averages more than 10 minutes per game is 6-5, so it's not a surprise that the Bulldogs rank 157th in the nation in rebounding (34.7 per game). That said, without Fab Melo, Syracuse isn't exactly teeming with height either; as it is, the Orange only out-rebound the Bulldogs by an average of 0.6 per game. Aside from the middling duo of Rakeem Christmas (6-9) and Baye Keita (6-10) that'll be charged with filling Melo's spot, Syracuse's tallest regulars are 6-7 (Kris Joseph), 6-8 (C.J. Fair), and 6-8 (James Southerland). Yes, the Orange still hold a height advantage over UNC-Asheville, but the discrepancy isn't overwhelming.

Regardless, I think whichever of the two teams wins this game will lose to Kansas State in the next round. Also certain to happen: Frank fucking Martin, win or lose, will disembowel Jim Boeheim or Eddie Biedenbach at game's end in leu of shaking either man's hand.

Can Shaka Smart and Virginia Commonwealth do it again?

Sure, they definitely could, as VCU, having won 17 of its last 18 game, is among the nation's hottest teams going into the tournament. One thing to remember about Shaka Smart's Rams is that only senior Bradford Burgess remains from the core of last year's Cinderella Final Four squad. An efficient Wichita State team, which can score, rebound, and share the ball as well as any team in the country, features a starting lineup comprised of five seniors and is led by 7-0 center Garrett Stutz. No doubt, this is an extremely tough first round draw for VCU. I like the veteran Shockers to emerge victorious.

St. Bonaventure and Davidson to the Sweet 16?! Are you crazy, stupid, or both?

Crazy and stupid like a fox! I do this every year. There's a hot team coming off an impressive run in its conference tournament that becomes a trendy pick to do damage in the NCAA Tournament. That's Florida State (Vanderbilt also fits this profile, but I'm subscribing to the hype). I told myself during the Atlantic 10 Final that if St. Bonaventure beat Xavier, I'd pick the Bonnies to win at least one game in the Big Dance. Why? Andrew Nicholson (you'll read about him later) and Demitrius Conger. I'm not going to waffle now.

Davidson is a really good team that can match up with anyone because of its size, scoring, and depth. The Wildcats boast five players who score in double figures, led by sophomore breakout stud De'Mon Brooks -- averaging 16 points and 6 rebounds in just 23 minutes per game! -- and my personal favorite, Jake Cohen. Why is Cohen a favorite of mine? I'll give you three options: A) He's a 6-10 Jew starring for a major D-I basketball program; B) He's from the Philadelphia suburb of Berwyn; C) A and B. I also think Bob McKillop is one of the best coaches in the country and wouldn't even be surprised if Davidson beats Michigan State -- which will have enough difficulty getting by Memphis in the round of 32 -- to make the Elite Eight for the second time in five years.

Midwest - North Carolina, North Carolina State (it seems like an 11 seed makes a run to the Elite Eight every year, and I like C.J. Leslie and NC State's chances the best)

Why: By far the most naturally talented team in the country. Anthony Davis, unibrow aficionado, is a total monster and the surefire first overall pick in the upcoming NBA draft. Michael Kidd-Gilchrist, Terrence Jones, and Doron Lamb will also be first round picks if they choose to declare.

Why: Darius Johnson-Odom, Jae Crowder, and Buzz Williams. Remember, this is a team that went to the Sweet 16 last year and returned two of its three top players (Johnson-Odom and Crowder). Besides, I've been partial to Marquette ever since I picked the Golden Eagles to make the Final Four in 2003 because of some guy named Dwyane Wade.

Why: Jeffery Taylor and John Jenkins are two legitimate first round NBA prospects and will be a handful for whatever team they face. Plus, Vanderbilt should have all the confidence in the world after defeating Kentucky to win the SEC Tournament. The East is wide open, and the Commodores are dangerous. Honestly, I'm half expecting Vandy to struggle with Harvard in the first round and narrowly escape an upset before going on to win its region (like Kentucky last year when it eked out that 59-57 victory over Princeton before making its run to the Final Four).

Why: Probably the team I watched most this season. Harrison Barnes is a top-five pick, Tyler Zeller is dominant yet chronically underrated (reason: too much whiteness), Kendall Marshall might be the best pure point guard in the country, and John Henson -- still battling a sprained left wrist that has rendered him questionable for the first two rounds -- is a freak of nature (with a weirdly proportioned body, but look at those tree limb arms!) who patrols the paint and defends the rim like no other. Don't forget about freshman James Michael McAdoo, nephew of NBA Hall of Famer Bob McAdoo, either. I'd consider it a colossal -- yes, colossal -- upset if the Tar Heels don't make it out of the Midwest region.

Last year, it was Morehead State's Kenneth Faried, who has made himself into one hell of a useful NBA player -- like a rich man's version of Jerome Williams (aka Junkyard Dog). They even have that same look and signature goofy smile (no, really). Anyway, this season, it's St. Bonaventure's Andrew Nicholson. The 6'9", 240-pound senior power forward from Mississauga, Ontario, has been putting up huge numbers since the moment he started as a freshman for the Bonnies and is a legitimate pro prospect projected to be a late first round pick. Nicholson already has an NBA-caliber post game and can beat defenders with an array of moves. He's a superb athlete with tremendous body control who is smooth in his movements and with his footwork. To watch Nicholson play is to understand how much he's grown, developed, and refined his game in four years. I'm sure the traditionalists adore his game and see him as emblematic of everything that's right about college basketball. Nicholson is a smart, cerebral player with a high basketball IQ and has waited four years for this moment. His offensive game is more advanced than his defensive game (though he's a solid defender and averages over two blocks per game), but he is a true power forward and has the tools to be an immediate contributor in the pros. Andrew Nicholson will become a household name as the Bonnies shock the world by beating Florida State and Cincinnati on their way to the Sweet 16. 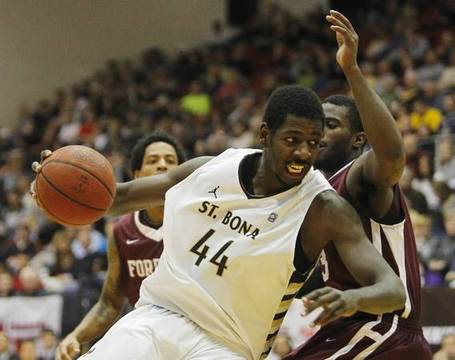 Happy viewing, everyone. If you need me, I'll be taking two hours off from work on both Thursday and Friday as I post up at the closest sports bar (and watch my bracket go up in flames). The reasoning I gave my boss: If you don't let me take an extended lunch break to watch the opening round of The Tournament, then I must conclude that you hate America.